(CNN) -- As tens of thousands of people cheered Barack Obama's presidential victory at his home base in Chicago, Illinois, others were celebrating near his future house. 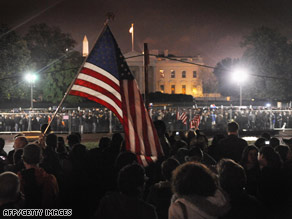 At least 1,000 people gathered on Washington's Pennsylvania Avenue in front of the White House late Tuesday night, shouting "Obama! Obama!" and "Yes we can!" Uniformed Secret Service officers were overheard, saying they'd never seen anything like it.

In Boston, Massachusetts, thousands of people -- many of them college students -- hit the streets to celebrate the election of the country's 44th president. The sound of car horns could be heard across the city, CNN affiliate WCVB reported. iReport.com: See, share your reaction

Boston police said the celebrations were peaceful, but they closed some streets to control the crowds, WCVB reported.

In Chicago's Grant Park, where police estimated at least 200,000 had gathered to hear Obama claim victory, the crowd erupted in cheers and screams after news organizations projected him the winner.

One of them, Brian Braddy of Chicago, said he is a Republican-turned-Democrat.

"I believe in [Obama] because he's younger, so he sees things differently, I hope," Braddy said.

Talk-show host Oprah Winfrey was also among the thousands in attendance at the Chicago celebration.

"It feels like there's a shift in consciousness. It feels like something really big and bold has happened here -- like nothing ever in our lifetimes did we expect this to happen. It feels like anything is now possible."

In Harlem, New York, hundreds had gathered to watch election returns on a large screen in a plaza near the Apollo Theater. Many cheered or started making calls to relatives and friends when Obama's victory was announced.

Many there said they couldn't believe an African-American had been elected president in their lifetimes.

People were celebrating in the streets into the night in other cities, including San Francisco, California and Seattle, Washington. iReport.com: Obama win celebrated in Antarctica

In Atlanta, the Rev. Bernice King, youngest daughter of civil rights leader Dr. Martin Luther King Jr., hailed the first African-American president-elect. When asked what Obama's victory meant to her, she said it meant "that the work that my mother and father sacrificed for was not in vain."

"I was very touched tonight and moved to tears when I heard the announcement, and I know that this is something that my father would be proud of America for," King said. "He would be proud of the many young people who turned out at the polls to make this possible, and it's a new dawning ... in America."

See what people are saying about Obama's victory »

"In quiet, solitary acts of citizenship, American voters gave voice to their hopes and their values, voted for change, and refused to be invisible any longer," she said.

"They understood his vision of a fairer and more just America and embraced it," Kennedy said. "They heard his call for a new generation of Americans to participate in government and were inspired. They believed that change is possible and voted to be part of America's future.

"Barack Obama is my friend and tonight, I'm very proud to call him my president. I look forward to working with him and Joe Biden on the many challenges facing our country here at home and around the world."

U.S. House Republican Leader John Boehner of Ohio congratulated Obama for "an achievement that is an important milestone for our democracy."

"President Lincoln, the first and greatest Republican president, envisioned an America in which the blessings and opportunities of liberty were truly and equally available to all citizens, regardless of race or creed," Boehner said in a statement. "The party of Lincoln stands together with all Americans tonight in heralding this historic achievement for freedom, and also in thanking Sen. John McCain for his decades of patriotism and service to our nation."