(CNN) -- California voters on Tuesday appear to have approved Proposition 8, a measure banning same-sex marriage in the state. 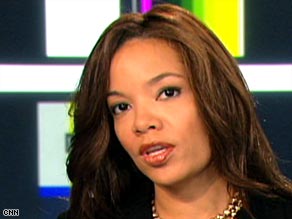 CNN legal analyst Sunny Hostin says the U.S. Supreme Court may have to rule on the issue of same-sex marriage.

California's secretary of state late Tuesday released semi-official results showing Proposition 8 had passed 52.5 percent to 47.5 percent. CNN has not officially called the result one way or the other.

On Wednesday protesters took to the streets of Los Angeles to voice their opposition to the potential ban. And there are at least three legal challenges to it now pending in court.

Chetry: California's attorney general says that the constitutional amendment is not retroactive, and San Francisco Mayor Gavin Newsom says he will continue to marry people until someone sues him to stop. So what does Prop 8 mean first of all to people who want to get married in the state of California?

Hostin: Well, we already know in Los Angeles they are no longer issuing marriage licenses to same-sex couples. So in Los Angeles, it's a no go. In San Francisco, as you mentioned, the mayor is saying, "We're still going to be doing it." So for people that aren't married yet, it's really legal limbo.

Chetry: All right. And what about people who from the time that they allowed same-sex marriage, this was in May until November, some 18,000 couples decided they were going to do it. What happens to them? Is their marriage still valid?

Hostin: It's still valid right now. But really they are also in a legal limbo. The bottom line it's all over the place. The law is really unclear here.

Last night, I was poring over these legal papers. I was also discussing this with a lot of law professors, a lot of different lawyers, and everyone is all over the place. Some folks said, you know, the bottom line is when you look at the language of Proposition 8, it is very clear that it was meant to be retroactive and that means that all the marriages will be invalidated.

Chetry: It's very interesting the grounds for which they are challenging. At least in one of these lawsuits they said that it was a constitutional revision rather than an amendment. And that means it would need two-thirds approval of the House in the legislature. So do we think it could go to the state house in California as well as being fought in the courts?

What is I think extremely interesting here is that we now know that we have a president-elect, Obama. He's going to get the opportunity likely to appoint Supreme Court justices. So we don't even know which type of court or the makeup of the court that will hear this. But I think the Supreme Court will likely weigh in on this issue.

Chetry: This was such a hot button issue in the state. More spending on either side, $35 million, $37 million on both sides.

Chetry: It was the highest funded campaign on any state ballot.

Chetry: They say it trumped every other campaign except the presidential.

Hostin: People care about this issue. I mean, they're talking about discrimination, equal protection. It's an issue that's a hotbed issue.

We also know, Kiran, that in Arizona and Florida that this ban was implemented. And so, you know, it's all over the place. People care about this issue, and this is an issue that is really present. And I think that it's something that, we, of course, have to watch because we're talking about equal protection, we're talking about discrimination. People care about these issues.

Chetry: Sunny Hostin, great to see you. Thank you.

Hostin: Thanks. iReport.com: Did you vote on a same-sex measure?

All About Same-Sex Marriage