WASHINGTON (CNN) -- When it comes to priorities, many polls suggest Americans want President-elect Barack Obama to fix the economy first when he enters the Oval Office in a little more than two months. 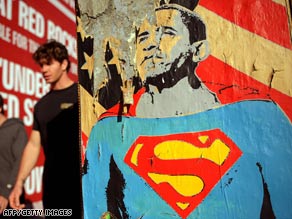 Getting Congress to approve tax cuts promised on the campaign trail may be a good start toward tackling the problem, analysts say.

If that goes well, experts say, the political momentum will help make it easier for Obama to keep his other campaign promises on alternative energy and getting health care for millions.

"In Washington, winning leads to winning, and losing breeds losing," said Stuart Rothenberg of the nonpartisan The Rothenberg Political Report.

"Between now and inauguration, every group in the country is going to lay down their marker as to what they think should be done, what they need, what they want and how they got him elected," Rothenberg said, adding, "This is a very fine line with various constituencies. Everybody wants a piece of Barack Obama."

In the first 100 days, a president's agenda easily can be derailed, especially if he provokes a fight with Congress. Election T-shirt: Obama inspires historic victory

In 1993, President Clinton set out to undo the ban on gays in the military -- a move that top military leaders strenuously opposed. The resulting fight led to the "Don't Ask, Don't tell" policy that remains in place today.

Watch Clinton's former chief of staff talk about the transition »

David Gergen, an adviser to four presidents, including Clinton, sees that move as a stumble that distracted Clinton from accomplishing his agenda.

"Bill Clinton, as talented as he was, and he was enormously talented, came in with some uncertainty about where to go each week, each month, and there was a certain amount of flailing," Gergen said, also a CNN senior political analyst.

"He lost his footing; he regained it later on, but his start was not as clean. It's really important to hit the ground running as president if you want to accomplish a lot," Gergen added.

Democrats' expectations of the new president-elect are running high.

Watch how Obama may build his Cabinet »

He added, "And so if he does not do what they hope he will do, what they expect he will do ... he'll start getting criticism on the left and on the right."

See who could be named to Obama's cabinet »

Gergen said, "Barack Obama has to avoid dilly-dallying, not being certain about where he's going to go.

"I must say about Barack Obama, he's one of the most strategic and disciplined political leaders we've had in a long time."

All About Barack Obama • Economic Issues