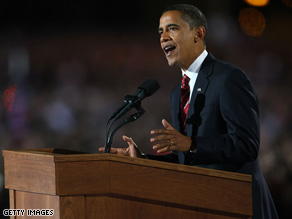 Barack Obama could start naming his Cabinet as early as Wednesday.

The Democratic party leader was expected to officially name his White House chief of staff as Rahm Emanuel, a Chicago colleague who helped lead the party to majority control of Congress in 2006.

Other key appointments, primarily the treasury chief who will help craft policy to lift the county out of financial crisis, were expected to be named shortly.

A team of intelligence briefers has been named and is ready to discuss with Obama the Presidential Daily Brief, similar to the one provided to President Bush, CIA Director Michael Hayden said in a message to CIA employees obtained by CNN.

"The campaign was over when McCain called to concede," Preston said. "[His] speech was about governing. It was a very serious tone -- he was setting the tone, taking his first steps as president."

CNN Senior Political Analyst Gloria Borger said that it was important to take steps quickly to set the right tone, pointing to President Clinton, who waited weeks to fill Cabinet positions and announced many of his top staffers just five days before he was sworn in.

"Everything you do early on in a presidency gets magnified. You don't want to make the same mistakes that Bill Clinton made," Borger said. iReport.com: What's Obama's biggest challenge?

Obama held no public events on Wednesday. He will most likely travel to Hawaii soon for the funeral of his grandmother, who died on Monday.

John Podesta, a former chief of staff under President Clinton, will be among those leading Obama's transition team. Valerie Jarrett, one of Obama's top advisers, and Peter Rouse, Obama's Senate chief of staff, will also be involved the effort.

Jarrett told CNN that Obama would begin making public his plans for the transition soon.

"In the days ahead, you will be hearing more directly from Sen. Obama ... about the steps that he'll be taking to get prepared to lead on January 20."

Filling out his economic team is a top priority for Obama as he begins to implement a strategy to quell the economic crisis.

"This is one of the first times that I can remember that the secretary of the treasury is going to be almost as important as the secretary of state," said David Gergen, a senior political analyst for CNN, who served in the Reagan and Clinton administrations.

Names circulating for the secretary of the treasury position include Timothy Geithner, Lawrence Summers and Paul Volcker, among others.

Geithner helped deal with Wall Street's financial meltdown earlier this year, overseeing the acquisition of Bear Stearns by JPMorgan Chase and the bailouts of AIG and Lehman Brothers. He was appointed president of the New York Federal Reserve in November 2003.

Summers was appointed treasury secretary in July 1999 and served as the chief economist of the World Bank from 1991 through 1993. Prior to his career in government, he taught economics at Harvard.

Volcker is a former chairman of the Federal Reserve, serving under Presidents Carter and Reagan. He also worked in the private sector as an investment banker and headed the investigation into the United Nations' oil-for-food program for Iraq.

Obama's national security team is another priority as the country fights wars in Iraq and Afghanistan. It could also be an area where he goes outside his party for an appointee.

Republican Sen. Chuck Hagel and current Defense Secretary Robert Gates are among the names being floated.

Hagel, who was elected to the Senate in 1996 and is a Vietnam veteran, has been a fierce critic of the Bush administration's handling of the Iraq war.

Gates has served in Bush's cabinet for almost two years. He worked for the Central Intelligence Agency for 27 years, serving as its director from 1991 through 1993. He also served as deputy national security adviser under President George H. W. Bush.

"What Barack Obama has to do in the transition time is set the tone," Borger said. "If he reaches out to Republicans in the cabinet -- if he decided to keep Bob Gates at Defense -- that's really, really important."