Obama's girls about to go into the fishbowl

(CNN) -- Barack Obama's daughters are moving into a house with a swimming pool, a bowling alley and its own movie theater. 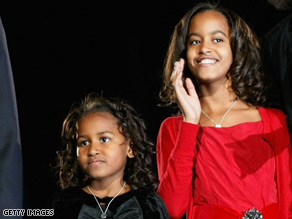 When their father is inaugurated on January 20, Malia Obama, 10, and Sasha Obama, 7, will also be moving into a place where they'll not only be under the watchful eye of the Secret Service but also under the eye of the media.

"One of the negatives of the White House is that its very much a fishbowl," presidential historian Doug Wead said.

"There's something that Sasha or Malia will say or do and they'll be remembered for it for the rest of their lives," said Wead, who wrote "All the Presidents' Children," a book on the lives of kids at the White House.

John F. Kennedy Jr. was known for hiding under his father's Oval Office desk. His older sister, Caroline, had a pony who romped untethered around the White House grounds.

President Abraham Lincoln's youngest son, Thomas, used to startle everyone in the building by making all the White House bells ring at one time.

But with the mischief and pranks comes a lifetime of pressure, said Noah McCollough, who wrote the book "First Kids."

"John Quincy Adams' kids went through alcoholism and addiction because they couldn't live up to their parents expectation" in their later years, McCollough said.

Much of Malia and Sasha's White House experience will be monitored by their mother, Michelle Obama, who seems determined to be active in their lives.

Even as her husband campaigned for the presidency, Michelle Obama was a soccer mom, cheering from the sidelines of her daughters' games.

Together with the president-elect, she'll have to decide where the girls will attend school.

"If they send their child to a private school they'll be called elitist for betraying the public school system," Wead said.

Jacqueline Kennedy, not wanting Caroline being hounded by the media as she went to school, set up a first-grade classroom on the third floor of the White House. Ten of Caroline's friends also attended, each bringing their own lunch pail.

No matter the choice, even their grades will come under public scrutiny.

"If you flunk that huge math test, it's on the front page of the newspaper the next day," McCollough said.

But assuming no one gets grounded for bad grades, imagine the possibilities for sleepovers or parties. President Gerald Ford's daughter Susan, for example, held her senior prom at the White House.

Whatever the educational choice, the Obamas have made clear their kids won't be an afterthought now that Barack Obama is about to become the world's most powerful person.

On Friday morning, before the president-elect met with his advisers on the troubled economy and before his first news conference since the election scheduled for the afternoon, Barack and Michelle Obama went to a parent-teacher conference at the University of Chicago Lab School.

And the girls will have company at the house on Pennsylvania Avenue.

"You have earned that puppy that is coming with us to the White House," their father told them in his acceptance speech.

All About Barack Obama • The White House