(CNN) -- Solomon Brown of San Jose, California, is one of the millions of voters who helped elect Barack Obama to be the future president. He's also one of the voters in California, Arizona and Florida who cast ballots in support of same-sex marriage bans that got considerable support in each state. 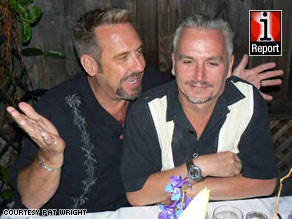 Jim Smotherman, left, and Pat Wright of La Mesa, California, rushed to get married in June.

His voting choices are a picture-perfect model of the paradoxical results of the 2008 U.S. presidential election. They also illustrate how Obama's inclusive strategy won over many voters who didn't necessarily toe the Democratic Party line.

The war in Iraq and the economy were the main issues Brown, 18, a first-time voter, said he considered in choosing a president. But when the time came to vote on the "one man and one woman" issue, he followed his moral beliefs and voted in support of California's Proposition 8. He said he isn't at all surprised that many voters did the same.

"They did that because of religion," Brown said of voters. "They wanted change for the country but weren't going to change their religion."

He had no qualms about voting for Obama, either, and adds that his choice wasn't related to race. But he worries what moral beliefs will be taught in coming years. iReport.com: Read Brown's thoughts on Proposition 8

Still, he says he doesn't hate gay people and has several gay friends. He emphasizes that he dislikes the fact that people are gay, but not the individuals themselves.

"I can't be prejudiced against them, with me being an African-American," Brown said. "That would be hypocritical in my eyes."

But Maggie Cassella of Toronto, Ontario, said she watched the U.S. elections and couldn't help but feel thankful for being in Canada. iReport.com: Watch Cassella express her disdain over the election

"I'm tired of talking about it, because I live in a country where I have all my rights now," she said. "I talk about politics, but it's never gay rights because we're done."

She said she felt upset by the election and couldn't help but wonder why voters would want to make the decision to elect a black man as president and then outlaw gay marriage at the same time.

"I would just like someone to talk to an African-American gay person from California or any person from California and ask them what it feels like to have your rights to be an equal citizen taken away concurrent with this great day in history," she said. "My guess is it actually doesn't feel so great. After all, civil rights are civil rights. I don't care what anybody says." iReport.com: Share your story or opinion of same-sex marriage

The issue hits close to home for Pat Wright of La Mesa, California, who married his partner, Jim Smotherman, in June. He says he doesn't like seeing the animosity from both sides and has personally lost friends over the issue.

"A lot of ugliness and nastiness has come out. I don't know how these people have a direct connection to God," Wright said. "How can people be so badly informed, why are they qualified to vote on my marriage, and should 52 percent of the population be able to take away my rights? A very ugly situation."

Wright said the couple rushed their marriage because of Proposition 8 and campaigned against it. They were saddened to see "Yes on 8" signs in nearby yards, but never expected the proposition to succeed.
iReport.com: "We are still numb and in mourning"

Two states away, Fred Thorne of Washington Terrace, Utah, said he was disappointed about the same-sex marriage decisions. Thorne says he comes from a long line of Mormons and that locals' views are highly shaped by their religion and the church.

He describes his parents as "freethinkers" who encouraged him to break away from the church's views and support "equal rights."

Thorne said he thinks religious organizations in Utah have a huge local and national political influence that oversteps the separation between church and state. iReport.com: Watch Thorne discuss "sexual equality behind the Zion curtain"

"Gays have the right to marry and be openly gay, in my opinion," Thorne said. "If it offends somebody, I'm sorry. I'm offended that you're offended by it."

Dinant, who is gay, said he feels Obama must make the legalization of gay marriage part of his agenda for change as he assumes the nation's top post.

The move to outlaw gay marriage adds "discrimination into a state's constitution," he said.

But the legal side of the issue looms large for John Riolo, a Rhode Island voter who prefers not to state the results of his last-minute voting decision. Riolo says both sides like to dig in their heels, and he wishes they would see eye to eye. iReport.com: Watch Riolo talk about his complex views

"My liberal and some, but not all, of my gay friends see same-sex marriage as a civil rights issue," Riolo said. "My conservative friends see gay marriage as fundamentally altering society and/or a violation of religious tradition."

Riolo doubts both religious consequences for gay marriage and violation of civil rights if the unions are banned. He said the decisions should be drawn up in courts and that both sides of the issue should maintain a clear head whatever the result.

"Marriage is little more than a license," Riolo said. "It is a privilege given by the state and, like a driver's license or any other type of license, the state can set up rules and criteria."

But for Wright, who feels fortunate he got to marry his partner, the decision boils down to legislating personal lives and Proposition 8 stings hard. iReport.com: Watch the scene of protests in California

"It has been a kick in the teeth," he said. "I can't imagine voting on someone's marriage."