(CNN) -- Rev. Martin Luther King Jr. told followers the night before he was killed that he had been "to the mountaintop" and seen the promised land of racial equality. Last week's election of Barack Obama was the equivalent of taking all African-Americans to that peak, says Dr. Alvin Poussaint. 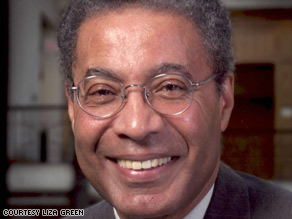 In his view, Obama's victory last week wasn't just a political triumph. It was a seismic event in the history of black America.

Poussaint has made it his life's work to study how African-Americans see themselves and how the larger society sees them.

From the days of the civil rights movement through the 1980s, when he was a script consultant on "The Cosby Show," to today, he has been a leader in assessing how images of black people in the media shape perceptions. Poussaint, who is 74, is professor of psychiatry at Judge Baker Children's Center in Boston and at Harvard Medical School.

At a key point in the civil rights movement, Poussaint moved to Mississippi and worked for the Medical Committee for Human Rights, in Jackson, from 1965 to 1967, helping care for civil rights workers and aiding the desegregation of hospitals and other health care institutions.

Poussaint met Bill Cosby in the 1970s and has worked with him on a variety of books and shows, most recently co-authoring a book with Cosby. He was interviewed by CNN on Wednesday.

CNN: What do you think is the long-term impact of the election of Barack Obama as a symbol and a message to the black community in America?

Dr. Alvin Poussaint: We're going to have a generation of children -- if he's in there for eight years -- being born in 2009, looking at television and images, hearing before they can talk, absorbing it in their brain and being wired to see the visual images of a black man being president of the United States and understanding very early that that's the highest position in the United States.

So I think that's going to be very powerful in its visual imagery ... and they're going to see these images constantly on television, probably offsetting a lot of the negative imagery that they may see in shows and videos and sometimes in stereotypic comedy.

These images will also make black parents proud. Although there are many barriers to this, it might put back on the table the importance of the two-parent family. ... Maybe it will do something for couples and bring black men and black women closer together.

The sense of pride may carry over into family life, the same way it is being carried over now into the life of the church already. At black churches this past Sunday, all of them were talking about Obama and being ambassadors for Obama -- in other words, suggesting that now that he's president, that black people should take the high road.

The big problem with all of this is that if there's high expectations that somehow the social ills that the black community faces will suddenly evaporate, they're going to be disappointed -- because the economy, the economic crisis is a major issue that's going to affect the black community, making things worse. ... So there's going to be more unemployment, more poor people, more black homeless and more poverty. ...

Obama's also going to have a positive effect on the white community. Way back in the 1960s, I used to go to Atlanta when it was segregated and even after it started desegregating. When you went downtown to restaurants, you would walk in as a black person and they would kind of act like, "What are you doing here?" You weren't welcome, you know, you just felt it.

And Maynard Jackson became the first black mayor, and I felt a whole change in the tone of the city. You went places and when you walked in, people had to consider: "Is this someone who knows the mayor, this black person?" And so I think they began to treat all black people better because black people were now in power. ... This may help to eradicate stereotypes that they hold. ...

So this may have a spinoff effect -- maybe more blacks will break through the glass ceiling in corporations, more blacks may, because of their newfound confidence, become more civically engaged, run for office.

CNN: What if he had lost, what would the impact have been then?

Poussaint: A lot of black people would have concluded that he lost because of his race, and the black people who had no faith in the system in the first place would have continued to feel that way, maybe even more strongly, and maybe even have more anger at the institutions that have authority over them and that they see as white-controlled.

CNN: Obama is taking over at a time of tremendous international and national challenges. Every president has setbacks. What would be the impact of setbacks on a political level?

Poussaint: Nearly everybody that you hear talk about it realizes that he's inheriting a horrible situation. In fact one of the black leaders joked about how, as soon as things are falling apart in the country, that they hand it over to a black person -- "Here, you take it."

People are saying that he's just been dealt a terrible hand and is going to have to work very hard to be successful and they're rooting for him and hoping. There's a mindset right now of "What can we do to help Obama?" And I don't think it's just black people saying it, it's all the people who voted for him, young people and women, the workers, the unions -- "What can we do to help him be successful, and undo the mess that we're in?"

CNN: What do you make of the idea that "The Cosby Show" made America more ready to vote for a black man to be president?

Poussaint: I don't know, you can't study this stuff scientifically. The intent when the Cosby show came on ... was to present a black family that was not the old stereotypical family that white people laughed at in a sitcom. And we wanted the show to have a universality, in terms of a mother, a father, wonderful children, a lot of love being shown, an emphasis on education.

Today if you have 12 or 15 million viewers of a show a week, it's number one. Well, Cosby was bringing in about 60 million people a week. So this had a deep effect on white children, Latino children, and even many adults, what their images of black people were.

So that's why Karl Rove reached into the hat the other day and said this was the beginning of the post-racial era, because it made white people embrace this black family like a family of their own and fall in love with it.

It probably played some role at chipping away at those negative images, which made white people ... more ready to embrace a lot of things, including Tiger Woods and Oprah Winfrey and Denzel Washington and Will Smith. Certainly when Obama gets on the scene, people don't say, "What kind of black family is that? We haven't seen any black family like that."

CNN: You were a consultant on the Cosby show. How did that come about?

Poussaint: I knew him and his wife. When the show was coming on, he called me and said he wanted me to ... be a production consultant to keep this a positive show without stereotyping: "I want you to read and critique every single script before it goes into production, anything you want to say to make this family psychologically believable, living in reality." He wanted the story lines to have a plot that made sense. ... He told me to weed out what he called put-down humor, which he felt was too prevalent, particularly on a lot of black shows where you make fun of people.

I was allowed to comment on anything, from the clothes to some of the people they were casting, to making sure there was a wide range of colors on the show in terms of complexion, what's on the reading table, what cultural activities the kids are going to, what colleges they're applying to. ...

CNN: You co-authored a book with Bill Cosby. What's the message of that book?

Poussaint: It's called, "Come on People: On the Road from Victims to Victors." The message is, don't be helpless and hopeless and see yourself as a victim and wallow in failing and think that's your lot in life. What you have to do is take the high road and you have to work hard to try to achieve against the odds. ...

Most of the black people are where they are today because we succeeded against the odds, we didn't allow the racism out there to totally squelch us. And we feel that spirit is being lost, particularly in low-income communities and sometimes among middle-income people too. And we felt they had to adopt more of an attitude of being victors.

And victors are active, they try to do their best, they take education very seriously. And Obama's a good example -- if he took a victim's attitude and said, "Well, a black man could never get elected president of the United States," which a lot of us felt like, he wouldn't have run for the presidency. So he adopted what we call a victor's attitude -- "I'm going to go for it, it may be a longshot, but it's possible."

CNN: What do you compare the Obama victory to in terms of significance?

Poussaint: The civil rights movement's success in getting the civil rights bill of '64 and the Voting Rights Act of '65, that opened things mightily for the black communities all over the country. Obviously getting those bills and those accomplishments -- forget about The Cosby Show -- the voting rights bill played a significant role in Obama's victory.

CNN: Does Obama's victory as a historical moment equal those?

Poussaint: It equals those but it has a more powerful visual symbolism. It's like people are going from [Martin Luther] King, who was moving us toward the mountaintop ... to Obama, people saying [we're] getting to the mountaintop and now being able to gaze down. So it's the fruition of a movement beginning in slavery. ... We were in slavery for 250 years, and then Jim Crow segregation for another 100, and we've been struggling for freedom. Obama represents us winning our freedom -- like "free at last, free at last, free at last."