(CNN) -- Shirley Chisholm, elected in 1968 as the first black woman in the U.S. Congress, once said: "I've always met more discrimination being a woman than being black." 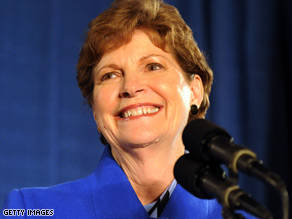 Slightly more than three years after Chisholm's death, Barack Obama will be sworn in as president, a huge step forward for African-Americans.

But for women, progress this election year was defined by "creeping and leaping," said CNN contributor Hilary Rosen, the Washington editor-at-large for Huffingtonpost.com.

Rosen favored Hillary Clinton, but she and other influential women pundits and activists note that Clinton and Gov. Sarah Palin's loss at the polls does not diminish the strides they made for their gender.

"Women are about 54 percent of the vote," Rosen said. "Do we have equal representation? No. Are we closer to it? Yes."

In the House, 10 new congresswomen will join the 64 incumbents who were re-elected, according to Rutgers University's Center for American Women and Politics, bringing the number of women in the 435-seat body to a record 74. The 100-member U.S. Senate gained one woman, Democrat Jeanne Shaheen of New Hampshire, who became the 17th female senator.

And several women could be appointed to prominent roles in Obama's administration.

Shaheen will be New Hampshire's first female senator. She won in a bitter battle against Republican incumbent John E. Sununu, tying him to the unpopular President Bush.

"It was an extraordinarily hard year for Republicans," said Leslie Sanchez, a CNN contributor, Republican strategist and former adviser to President Bush. "You didn't have to go much further than relying on how unhappy people are with the administration."

North Carolina elected Beverly Perdue, who becomes the state's first woman governor. Perdue is the first pro-choice female governor of a Southern state since the late Ann Richards of Texas, according to Emily's List, which raised $43 million in 2007-2008 to help develop the candidacies of Democratic women.

"This is the state of Jesse Helms!" said New York Rep. Carolyn Maloney, a Democrat, referring to one of the most polarizing figures in American political history. Helms opposed civil rights and a holiday honoring the Rev. Martin Luther King Jr. "It's always a big deal when a woman is elected to high office, but this was a significant shift," Maloney said.

Perdue was the subject of a GOP ad that pictured Obama with his arms around her as his former pastor Jeremiah Wright's incendiary sermons play in the background. In the closing days of the campaign, Dole ran an ad that insinuated Hagan was "godless."

"Women generally don't react favorably to campaign smears and mudslinging," said Kim Gandy, the president of the National Organization for Women. "We elected the women who talked about issues that we care about -- child care, minimum wage, health care, equal pay."

Both Hagan and Perdue were overwhelmingly favored by women voters, according to exit polls.

Perdue headed up a commission that spent money from a settlement with tobacco companies on health care. In the days before the election, Lilly Ledbetter appeared at a Hagan event.

A jury awarded Ledbetter $3 million in damages when it found that Goodyear had discriminated against her by giving her smaller raises than male managers. By a 5-4 vote, the Supreme Court threw out that award and said the complaint had been filed too late. Obama supported the Lilly Ledbetter Fair Pay Act; McCain said it wasn't necessary. Democrats passed it in the House but Republicans blocked it in the Senate.

"Lilly Ledbetter has come to symbolize so much to women," NOW's Gandy said. "That issue alone will change votes."

Among the women expected to play a key role in the Obama administration is Karen Kornbluh, who served as a policy adviser and was the principal author of the Democrats' party platform. Kornbluh used to direct The Work and Family Program at the New America Foundation, served in the Clinton administration and was an adviser to Sen. John Kerry on the Senate Commerce Committee.

She's well-known in D.C. for her essays "The Mommy Tax" and "The Joy of Flex," which addressed the needs of the "juggler family," or the household where two parents are working and no one is at home full-time. She argues for federal support for child care and after-school care, and control over flex-time for employees whose long hours usually come at the expense, emotionally and financially, of their families.

"In Washington, she is really considered Obama's brain on so many policies," said Steven Clemons, director of the American Strategy Program at the New America Foundation and writer of the Washington Note blog. Read exclusive interview with Kornbluh

"Her ideas are fresh and applicable to real life, real Americans." Clemons said. "She's been quoted all over Washington from Joseph Lieberman to John Edwards since the [presidential] race in '04."

Also, Susan Rice is believed to be under consideration for national security adviser. She is Obama's chief foreign policy adviser, a former assistant secretary of state for African Affairs and protégé of former Secretary of State Madeleine Albright.

Valerie Jarrett has also been mentioned for White House postings and as a possible appointee to fill the Senate seat that Obama will vacate. She is the Obamas' closest friend and has served as a political adviser.

"The consultants will drag you through the mud so Obama was brilliant in putting Valerie in that role," Sanchez said. "Her counsel was very grounding for him and she protected him as a candidate."