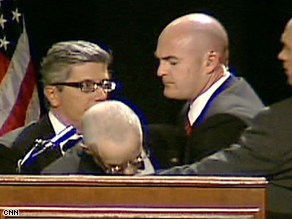 Michael Mukasey is helped as he begins to collapse during his speech Thursday night.

Mukasey, 67, did not suffer a stroke or experience a heart attack, she said Friday morning.

Mukasey collapsed while giving a speech Thursday at the Federalist Society dinner at the Marriott Wardman Park Hotel in Washington.

He was giving a spirited defense of the Bush administration's legal policies when his speech began to slur and he lost track of his thoughts about 30 minutes into his talk. Seconds later, he became rigid and then began to slump.

"The attorney general is conscious, conversant and alert," Carr said Thursday night. "His vital statistics are strong and he is in good spirits.

Mukasey was telling jokes and was ready to go home from the hospital, said a Justice Department official, who was not authorized to speak on the record about Mukasey's condition.

As Mukasey began to collapse, two people grabbed him and laid him on the stage. On a tape of the speech, a voice can be heard saying "Oh, no oh! Oh my God!"

He was given medical attention on stage by a woman and three men before he was rushed to the hospital. EMS personnel arrived on the scene less than 15 minutes after his collapse.

Before the EMS arrived, one man is heard asking people to please stay in their seats. In the background, a voice is heard saying "bring his feet up." While Mukasey was being attended to, the audience remained seated and quiet.

Outside the hotel, numerous police cars rushed to the scene. Moments later, a fire truck arrived and then an ambulance.

White House deputy press secretary Tony Fratto told CNN that President Bush has been informed of the situation and has Mukasey in his "thoughts and prayers."

As he approached the podium and during the bulk of his appearance, Mukasey showed no signs of ill health.

During his speech, he praised the administration for "nothing less than a fundamental reorganization of our government" after the 9/11 terrorist attacks and blasted the "relentless critics of the very policies that have kept us safe."

Early in his speech, Mukasey noted Supreme Court justices were in attendance, and he praised John Roberts and Samuel Alito as "remarkably accomplished justices."

His speech was punctuated several times by applause from the audience.

Mukasey is a retired federal judge appointed to the bench by President Ronald Reagan.

Mukasey was nominated to be attorney general by President Bush in September 2007 and was confirmed by the Senate in November 2007.

As a judge, Mukasey ruled that the U.S. government's detention of "dirty bomb" suspect Jose Padilla was constitutional, but that he must be allowed to meet with his attorneys.

During his attorney general confirmation hearings, Mukasey said he would make legal decisions based "on facts and law, not by interests and motives."

Mukasey also said he would resign from office if faced with a presidential order he believed was unconstitutional.

All About U.S. Office of the Attorney General • Michael Mukasey