WASHINGTON (CNN) -- As Washington gears up for January's presidential inauguration with high-priced tickets to fancy affairs, one businessman is making sure that some of the less fortunate will have a chance to share in the festivities. 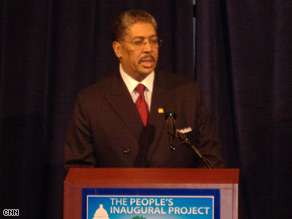 Earl Stafford is a Virginia businessman helping the disadvantaged see the inauguration.

Virginia businessman Earl Stafford has spent $1 million to give hundreds of poverty-stricken and terminally ill Americans, along with wounded men and women in uniform, an inauguration experience that won't cost them anything.

The zero-dollar price tag is even more shocking, considering that tickets to the inaugural events are going for hundreds of dollars, the city's remaining hotel rooms are edging into four-figure territory, and even basements and couches miles from the National Mall are going for a premium on Craigslist.

Tickets for the inauguration are distributed through members of Congress, and just 240,000 seats are available for the swearing-in ceremony. The tickets are supposed to be free, but with demand outpacing supply, some people have been trying to scalp tickets for thousands of dollars.

Stafford's event is one of the splashiest inauguration packages out there. It includes high-end hotel rooms and luxury suites, food and drinks, a heated viewing spot right above the parade route, even gowns and tuxedos to wear to celebratory balls and a beautician to help attendees get ready.

Hours after the election, Stafford, a 60-year-old businessman and son of a Baptist minister, invested in what the JW Marriott billed as its $1 million "build-your-own-ball" inaugural hotel package.

His family's nonprofit foundation, the Stafford Foundation, is footing the bill for what it is calling the People's Inaugural Project, but it is also hoping to get money from sponsors.

"I was inspired to do this by the Lord. ... It's not about us but about us helping other people," he said.

At least third of the tickets to the event will go toward people who are needy or underprivileged, and the rest of those participating could be people from sponsoring foundations, companies or volunteers.

Everything, he said, will be taken care of: transportation, evening gowns and tuxedos for the ball.

He hopes that providing a front row seat to history will inspire those invited to do good things in their communities.

Stafford said he began thinking about the project in March. He voted for Barack Obama, and records show he contributed $4,600 to the Democrat's campaign, according to the Washington Post.

Stafford, a retired Air Force officer, noted that he does not agree with all of Obama's positions. But, he told the paper, he decided the inauguration would be "a transition in history, if you will ... and everyone should be included."

CNN's Samantha Hayes and Rebecca Sinderbrand contributed to this report.