WASHINGTON (CNN) -- Help may soon be on the way to the struggling U.S. auto industry after House Speaker Nancy Pelosi backed off her opposition to using funds from a fuel-efficiency research program for a bailout, two congressional officials said Friday. 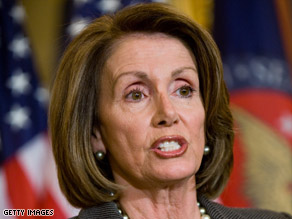 The significant move from Pelosi signals that the deadlock over rescuing Detroit may be over.

However, one senior Democratic congressional source told CNN that House and Senate committee staff will meet over the weekend to write a bill to provide $20 billion to $25 billion in assistance to the U.S. auto companies.

This aide said the "mathematicians were working" at how to reprogram the money by reducing a subsidy to come up with a figure that would be available for loans, despite an earlier report that only $7.5 billion was available from the fund passed last year for fuel efficiency research.

This aide said the bill could be on the House floor as early as Tuesday, but thought it was more likely that the Senate would vote on the bill first.

"They need to get Republicans on board and send an important signal for House members to vote for this," the aide said.

The officials cautioned that talks are still very fluid and that there are still other options on the table and many details to discuss.

Pelosi released a statement saying that Congress was "considering various short-term funding options" but added that no funds would be released from the research program "unless there is a guarantee that those funds will be replenished in a matter of weeks."

Pelosi reversed herself because November's devastating jobs report -- more than a half-million jobs lost -- "changed everything," one official said.

The California Democrat spoke by phone with White House Chief of Staff Josh Bolten on Friday afternoon to tell him of her change of heart, hours after Bush issued a fresh warning that without help, the automakers may not survive the economic crisis.

A senior administration official had no comment on Pelosi's move.

Both Pelosi and Senate Majority Leader Harry Reid issued statements Friday saying they hope to have legislation ready by next week to pass and send to the White House for the president's signature, another sign of sudden determination to bridge the deep divide over bailing out Detroit.

"It should never have come to this. The auto companies dug themselves into this hole and for years did nothing to climb out of it," Reid said in a statement. "But we are not acting for executives' sake; we are acting on behalf of the workers and their families. This week's hearings have made clear that we cannot let these companies fail."

Talks on all sides will continue throughout the weekend.

News of the jobs loss broke just before auto executives testified once again on Capitol Hill to plead for $34 billion from taxpayers.

"In the midst of the worst economic situation since the Great Depression, it would be an unmitigated disaster," Frank said.

General Motors has warned that it will run out of money needed to stay in business this month without federal help. It says it needs at least $4 billion by the end of the month and another $6 billion in the first quarter as part of up to $16 billion of help it says it will need to survive until 2010.

Chrysler says it is also on the verge of running out of money and needs $4 billion by the end of March, part of $7 billion it is requesting in total.

Ford, which has more cash on hand, said it hopes to avoid borrowing money but wants access to up to $9 billion in loans as a backstop in case problems get worse than expected.

The auto industry CEOs ran into harsh criticism the last time they appeared before the House Committee in November, as lawmakers hammered them on their lack of details on how they would spend the $25 billion then being requested and their decision to each fly to Washington on their own private jets.

This time, the auto industry leaders came with detailed plans submitted this week on how they would return to profitability if they get the federal loans. They also drove hybrid vehicles to Washington and promised to work for $1 a year.

The hearing started an hour after the Labor Department reported the loss of 533,000 jobs in November, the biggest loss in nearly 34 years.

By the end of more than six hours of testimony, it was clear that the panel was far more open to the idea of a bailout than it had been just two weeks ago, even if a solution still seemed elusive.

"I think it's fair to say the disastrous job report today has heightened the interest in doing something," Frank said at the conclusion of the hearing. "If we are lucky, we'll come out with a bill next week that nobody likes. Because any bill that any individual might like won't pass. But there is a sufficient consensus that we need to so something acceptable to enough members of both houses so that we avert disaster."

The CEOs' appearance followed testimony they gave before the Senate Banking Committee on Thursday.

Despite the apparent breakthrough, several House Republicans said they remained reluctant to sign on to any bailout. Some suggested that a bankruptcy filing would be a better way for the companies to become competitive, and others said they were concerned about other industries and businesses that might seek help if the automakers get aid.

All About Nancy Pelosi • National Economy