Blagojevich free on $4,500 bail after arrest

(CNN) -- Illinois Gov. Rod Blagojevich appeared in court Tuesday afternoon to hear federal corruption charges against him. He was released on $4,500 bail. 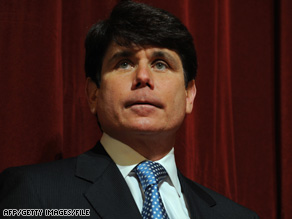 Rod Blagojevich is serving his second term as governor of Illinois.

The Democratic governor, who appeared in court in a blue jogging suit, also had to forfeit his passport.

FBI agents arrested Blagojevich and his chief of staff, John Harris, early Tuesday on federal corruption charges related in part to the selection of President-elect Barack Obama's successor to the Senate, the U.S. attorney's office said.

"Gov. Blagojevich has taken us to a new low," he said. "This conduct would make [Abraham] Lincoln roll over in his grave."

Lincoln was a congressman from Illinois before becoming president.

Fitzgerald said the government had bugged the governor's campaign office and placed a tap on his home phone.

Each was charged with a count of conspiracy to commit mail and wire fraud and a count of solicitation of bribery, authorities said.

In a 76-page affidavit, federal authorities said wiretaps caught Blagojevich conspiring to sell or trade the vacant Senate seat in exchange for financial benefits for himself and his wife, Patti.

The governor also often weighed the option of appointing himself to the Senate seat, saying he was "stuck" at governor and might have access to more resources as a senator than as a governor, the affidavit says. A Senate seat could also help him remake his image ahead of a possible presidential run in 2016. "If ... they're not going to offer anything of any value, then I might just take it," he said in one conversation.

Obama reacted at a news conference on Tuesday.

View politicians' reactions to the charges »

"Obviously, like the rest of the people of Illinois, I am saddened and sobered by the news that came out of the U.S. attorney's office today," he said. "But as this is an ongoing investigation involving the governor, I don't think it would be appropriate for me to comment on the issue at this time."

When asked whether he had any contact with Blagojevich about the Senate seat, Obama said he had no contact with the governor or his office.

"I was not aware of what was happening," he added.

At times, Blagojovich discussed obtaining a substantial salary for himself at a nonprofit organization or an organization affiliated with labor unions, as well as placing his wife on paid corporate boards where she might make as much as $150,000 a year, the government said.

During one recorded conversation, Blagojevich said he needed to consider his family and said he was financially hurting, the affidavit said.

Get an overview of the governor and the case against him »

"I want to make money," Blagojevich said, according to the affidavit.

The intercepted phone calls also caught the governor and Harris discussing the possibility of the Tribune Co.'s obtaining assistance from the Illinois Finance Authority in efforts to sell the Cubs and the financing or sale of Wrigley Field, the government said. The company owns the Chicago Tribune, the Cubs and Wrigley Field.

The Tribune Co. announced Monday that it is filing for Chapter 11 bankruptcy protection.

Blagojevich allegedly directed Harris to tell Tribune officials that state assistance would be withheld unless members of the Chicago Tribune's editorial board were fired. The Illinois governor saw them as "driving discussion of his possible impeachment," the affidavit said.

"Our recommendation is fire all those [expletive] people, get 'em the [expletive] out of there and get us some editorial support," the governor allegedly said in one phone call.

Federal authorities also allege the governor and Harris schemed with others -- including convicted real estate developer Antoin "Tony" Rezko -- to obtain financial benefits for himself, his family and others, including his campaign committee, Friends of Blagojevich.

Reports from the Chicago Tribune last week said federal authorities were investigating the governor and were secretly taping his conversations -- with the help of his former congressional chief of staff, John Wyem.

"I don't believe there's any cloud that hangs over me," Blagojevich told WLS-TV in Chicago on Monday as he responded to the reports of wiretapping. "I think there's nothing but sunshine hanging over me."

He added, "By the way, I should say if anyone wants to tape my conversations, go right ahead, feel free to do it. I appreciate anybody who wants to tape me openly."

Fitzgerald said the case required "unusual measures" because of actions Blagojevich was expected to take soon, including filling the vacant Senate seat. "There were a lot of things going on that were imminent," he said.

"We were in the middle of a corruption crime spree and we wanted to stop it," Fitzgerald said.

One big question now is whether Blagojevich retains the right to name Obama's successor if he remains in custody or even under indictment. The answer is yes, according to Fitzgerald.

Jay Stewart, executive director of Chicago's Better Government Association, agreed. He said Blagojevich retains the right to fill the senate vacancy until he's out of office, which won't happen unless he quits or is removed from office by impeachment.

At a news conference Tuesday, Illinois Sen. Dick Durbin, a Democrat, said he wants the Illinois Legislature to act quickly to pass a law setting a special election to fill Obama's seat, in order to prevent Blagojevich from making a tainted appointment or there being a lengthy vacancy in the Senate.

"No appointment by this governor under these circumstances could produce a credible replacement," Durbin said. iReport.com: What do you think of Blagojevich's corruption charges?

Fitzgerald said Blagojevich was looking to pull $8 million in funding for a children's hospital after the hospital's chief executive officer did not give a $50,000 contribution to the governor's campaign.

Also, Fitzgerald said, it was expected that Blagojevich would soon sign into law a bill that would direct a percentage of casino revenue to the horse racing industry -- a bill supported by someone who contributed $100,000.

"To let that bill be signed, to me, would be very, very troubling," Fitzgerald said.

The governor's office, in an afternoon statement, said the allegations "do nothing to impact the services, duties or function of the state."

"Our state will continue to ensure health, safety and economic stability for the citizens of Illinois."

Lt. Gov. Pat Quinn said the governor should use a provision in the Illinois constitution that allows him to step down, but not necessarily to resign. "I recommend to the governor to realize ... that he cannot carry out his responsibilities of office today, and he should, in my opinion, step aside."

Quinn, a Democrat like Blagojevich, said under the provision, a determination can be made later as to whether he can return to office.

Quinn said he had not spoken to Blagojevich at length since summer 2007.

Blagojevich, who turns 52 on Wednesday, is in his second four-year term as Illinois governor. His term ends January 2011.

Before that, he served as a U.S. congressman for Illinois' 5th district from 1997 until 2003, according to his online biography.

He and his wife have two daughters.

The state's last governor, George Ryan, was convicted in April 2006 on racketeering and fraud charges.

Ryan reported to a federal prison in Wisconsin in November 2007 to serve a 6½-year sentence. Earlier this year, the Supreme Court of the United States said it would not hear an appeal from Ryan.