Bush opens up on struggle with alcohol abuse

WASHINGTON (CNN) -- President Bush reflected on his own struggle with alcohol in a White House meeting Thursday that touted gains in the war on drug abuse. 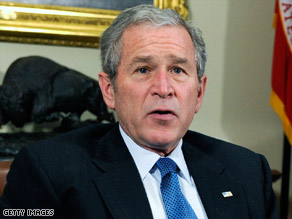 President Bush speaks about his administration's efforts in fighting drug abuse at the White House on Thursday.

CNN was the only media outlet invited to attend the entire meeting, which other reporters joined in the final minutes for remarks from the president.

Several in the room, including Don Coyhis of Colorado Springs, Colorado, who runs a program targeting Native Americans battling substance abuse, were recovered addicts or alcoholics.

Bush, who quit drinking at the age of 40, was impressed.

"Congratulations on 30 years of sobriety," the president told Coyhis. "I'm eight years behind you."

The president told the group of 14 -- all leaders in drug prevention, treatment and interdiction programs across the country -- that a new study shows teen drug abuse has dropped 25 percent since he took office in 2001.

"No question there's still work to do in America, but we are making progress," Bush said.

But the study by the University of Michigan cautioned that progress could be threatened by a drop in the percentage of young people who think marijuana is harmful. And it found that a high percentage of teens are abusing prescription drugs, with nearly 10 percent of high school seniors reporting using Vicodin over the past year and nearly 5 percent abusing OxyContin.

Bush listened to participants' stories and shared some candid moments.

Professional baseball player Josh Hamilton, who once suffered from a debilitating drug addiction, talked about seeking help from eight treatment centers. "They didn't work for me," he said.

It wasn't until his grandmother confronted him while he was high on drugs that something clicked.

"That moment cleared my mind, opened my heart, and that following night I committed my life to Christ," Hamilton said.

The president praised the effectiveness of the programs represented, most private and faith-based.

"I'm a faith-based guy," Bush explained. "Sometimes, to help change a person's behavior, you have to change their heart. Government's not really good at that."

Former New Orleans District Attorney Harry Connick Sr. talked about why he was motivated to launch a student drug testing program that has now spread to 20 city high schools.

Over his nearly 30-year-career, Connick said, "I sent a lot of people to the penitentiary. But at one point I thought, this is not enough."

The father of singer Harry Connick Jr. maintained that the best way to reduce demand for drugs is to test high school students.

"Of the millions of people who need help, most don't get it because they don't think they need it," McQueen explained.

When McQueen announced that her Houston program was based in "the great state of Texas," Bush interrupted with a broad smile, "I'll be home in about -- but who's counting -- 39 days."

Dr. Nora Volkow, director of the National Institute on Drug Abuse, discussed research showing that 50 percent of a person's vulnerability to drug addiction is genetic.

Bush asked whether the same was true of alcohol abuse.

"There's clearly a genetic component," Volkow responded. "That's why prevention is so important."

"It's a daunting task," Boudreaux said of the efforts, which often involve confronting Mexican drug dealers intent on protecting their hidden fields.

Boudreaux added that his mother often prays for the president.

"One of the most striking aspects of being president is the power of prayer in my life. I feel it," Bush said. "Some days are happy. Some days are not so happy. But every day is joyous."