(CNN) -- President-elect Barack Obama said Friday that he hopes there still will be a way to provide temporary assistance to keep the troubled U.S. automakers afloat. 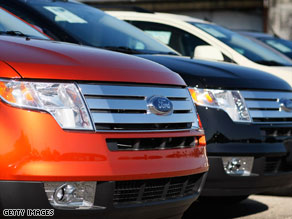 A proposal to bail out the U.S. auto industry failed in the Senate on Thursday night.

"I am disappointed that the Senate could not reach agreement on a short-term plan for the auto industry," Obama said in a statement following Thursday night's defeat of a $14 billion bailout proposal.

"The revival of our economy as a whole should not be a partisan issue. So I commend those in Congress as well as the administration who tried valiantly to forge a compromise. My hope is that the administration and the Congress will still find a way to give the industry the temporary assistance it needs while demanding the long-term restructuring that is absolutely required."

Obama also said he shared in the frustration about "decades of mismanagement" in the auto industry that contributed to the crisis.

The White House said earlier Friday that it will consider using funds from the original $700 billion Wall Street bailout if necessary to keep the automakers from failing.

The White House originally opposed using any of the $700 billion to help the auto industry, but it also has said the Big Three must get some financial assistance soon.

Those funds were intended for the financial services industry and banking system to shore up the financial infrastructure of the economy.

The Bush administration's announcement came after a deal for $14 billion in federal loans for the automobile industry died on a procedural vote on the Senate floor late Thursday.

"Under normal economic conditions we would prefer that markets determine the ultimate fate of private firms. However, given the current weakened state of the U.S. economy, we will consider other options if necessary -- including use of the TARP program -- to prevent a collapse of troubled automakers," she said, referring to the Troubled Assets Relief Program, or Wall Street bailout.

Perino said the collapse of the automobile industry would have a severe impact on the economy, and "it would be irresponsible to further weaken and destabilize our economy at this time."

While the federal government may need to step in, she added, the auto companies and their unions also must be prepared to make concessions.

The Senate voted 52-35 to bring the measure for a vote -- short of the 60 votes needed to advance the legislation. Following this crushing defeat for the Big Three, Senate Democrats issued dire warnings, while Republican senators put the blame on the automobile companies.

There are fears General Motors Corp. and Chrysler might not last a month without some sort of cash infusion. Ford Motor Co. has more cash on hand, but problems in the supplier base could disrupt production.

Republicans said the United Auto Workers were not willing to go along with a proposal led by GOP Sen. Bob Corker to have Big Three Union workers get the same pay as U.S. employees of foreign automakers.

"We had an arrangement last night that we were just six minutes away from a full agreement that would have really caused these companies to be able to go in the future very healthily," Corker said Friday on CNN's "American Morning."

"It came down to one thing -- and that was just getting the UAW to agree to a date certain that they would be competitive."

Senate Minority Leader Mitch McConnell, R-Kentucky, said while no one wants to see the Big Three go down, "very few of us had anything to do with the dilemma that they've created for themselves."

Before the defeat, Senate Majority Leader Harry Reid, D-Nevada, said lawmakers knew the vote was going to fail and made clear he knew what the consequences would be.

"Everyone should understand this vote is over tonight. I don't think we're going to get 60 votes. It's over with. I dread, Mr. President, I dread looking at Wall Street tomorrow. It's not going to be a pleasant sight," he said Thursday night.

Some analysts expressed surprise that the Republicans broke with the White House. The White House was instrumental in hammering out the plan that sped through the House of Representatives this week.

"I think the White House has no influence over anyone at this point. And that's the first lesson," said Jeffrey Toobin, CNN's senior legal analyst.

"That doesn't seem like a very effective way to negotiate. And so this turned into a cost-free way for the Republicans to say we don't like this deal," he said.

All About U.S. Congress