(CNN) -- President-elect Barack Obama on Thursday defended his pick of evangelical pastor Rick Warren to deliver the invocation at his inauguration next month as one of "a wide range of viewpoints that are presented." 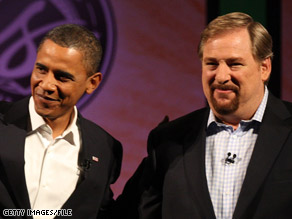 President-elect Barack Obama has chosen pastor Rick Warren to deliver the invocation at his inauguration.

"And that's how it should be, because that's what America is about," Obama said responding to a question at a news conference about his and Warren's differences on social issues. "That's part of the magic of this country is that we are diverse and noisy and opinionated."

Liberal groups and gay rights proponents had criticized the president-elect on Wednesday for choosing Warren, who opposes same-sex marriage and abortion rights.

Those socially conservative stances put him at odds with many in Obama's Democratic Party, especially the party's most liberal wing.

"[It's] shrewd politics, but if anyone is under any illusion that Obama is interested in advancing gay equality, they should probably sober up now," Andrew Sullivan wrote on the Atlantic Web site Wednesday.

Obama in the news conference also defended his record on equality for gays.

"I think that it is no secret that I am a fierce advocate for equality for gay and lesbian Americans," he said. "It is something that I have been consistent on, and I intend to continue to be consistent on during my presidency."

People for the American Way President Kathryn Kolbert told CNN she is "deeply disappointed" with the choice of Warren and said the powerful platform at the inauguration should instead have been given to someone who has "consistent mainstream American values." iReport.com: What do you think of the pick?

"There is no substantive difference between Rick Warren and James Dobson," Kolbert said. "The only difference is tone. His tone is moderate, but his ideas are radical."

Dobson, a social conservative leader, is founder and chairman of Focus on the Family.

Linda Douglass, a spokeswoman for Obama, defended the choice of Warren, saying, "This is going to be the most inclusive, open, accessible inauguration in American history."

"The president-elect certainly disagrees with him on [lesbian, gay, bisexual, transgender] issues," Douglass said. "But it has always been his goal to find common ground with people with whom you may disagree on some issues."

Douglass also noted that Obama and Warren agree on several issues, including advocating on behalf of the poor, the disadvantaged and people who suffer from HIV/AIDS.

Watch CNN's Anderson Cooper and his panel discuss the selection »

Obama pointed out that Warren had invited him to speak at his Saddleback Church two years ago even though Warren knew that he had views "that were entirely contrary to his."

"We're not going to agree on every single issue, but what we have to do is to be able to create an atmosphere when we can disagree without being disagreeable and then focus on those things that we hold in common as Americans."

Obama also pointed out that Southern Christian Leadership Conference co-founder the Rev. Joseph Lowery, "who has deeply contrasting views to Rick Warren on a whole host of issues," is also speaking.

Warren's support of California's Proposition 8, a measure that outlaws same-sex marriage in the state, sparked the ire of many gay rights proponents earlier this fall.

Warren, who has made it a practice not to endorse candidates or political parties, wrote in October that the issue of gay marriage is not a political issue, but instead "a moral issue that God has spoken clearly about."

"For 5,000 years, every culture and every religion -- not just Christianity -- has defined marriage as a contract between men and women," Warren wrote in a newsletter to his congregation. "There is no reason to change the universal, historical definition of marriage to appease 2 percent of our population."

Warren also stirred controversy earlier this week when he told Beliefnet.com his grounds for opposing same-sex marriage lie primarily on his right of free speech.

"There were all kinds of threats that if [Proposition 8] did not pass, then any pastor could be considered doing hate speech if he shared his views that he didn't think homosexuality was the most natural way for relationships, and that would be hate speech." In the 2008 election, Warren hosted Obama and Sen. John McCain, the Republican presidential nominee, at a candidate forum held in his church.

His book "The Purpose Driven Life" has sold more than 20 million copies since it was first published five years ago, and Time magazine named him one of the 25 most influential evangelicals in 2005.

"Many believe that Warren ... is the successor to the [Rev. Billy Graham] for the role of America's minister," Time wrote in 2005.