(CNN) -- Reporters Carl Bernstein and Bob Woodward relied on FBI insider W. Mark Felt as a reliable but anonymous source for their stories on the Watergate scandal that led to President Richard Nixon's resignation in 1974. 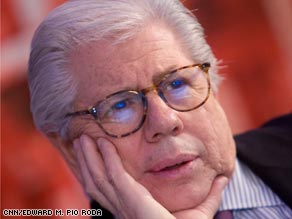 Felt, referred to as "Deep Throat" in the Washington Post stories and in Woodward and Bernstein's book "All the President's Men," died Thursday in California at 95. He revealed his identity for the first time in 2005.

Bernstein never met Felt until this year, but praised his courage during an interview Friday on CNN's "American Morning."

AM: What are your thoughts on the occasion of Mark Felt's death?

Bernstein: I think it's a little emotional, even though he was 95 years old. He was integral to our coverage. He was one of many sources in Watergate who had both the intelligence and the courage to tell the truth. And in his own organization he was one of the few, and he was near the top. What his information enabled us to do was to confirm stories that we had really obtained elsewhere, more than anything else, rather than give us that much primary information. But it was invaluable, and he performed a great act of courage and national service.

AM: The way that he was portrayed by Hal Holbrook in "All the President's Men" was he would give your partner Bob Woodward a little bit of a tease and say, "I'm not going to tell you anything more than that; you've got to follow the trail." Was that an accurate portrayal?

Bernstein: Yeah. Yeah, that's what we did. But his knowledge gave us a grounding and assurance that we were right in what we were saying and reporting. [He gave us] a certainty in a situation where you had the leader of the free world attacking the press every day, making our conduct -- Woodward's, myself's, the Washington Post's -- the issue in Watergate rather than the conduct of the president and his men. So I think Mark Felt's confirming this information (and occasionally he gave us some important information that we hadn't obtained, toward the end, elsewhere), it was absolutely invaluable.

AM: It was always Bob Woodward's intention to keep the identity of Deep Throat secret until the occasion of Mark Felt's death.

Bernstein: Well, we both kept it. I knew who he was. The two of us knew.

Bernstein: To both of us. It was a total surprise, even though I'm a contributing editor at Vanity Fair magazine and they disclosed it. They scooped everybody on that one. Yeah, we were surprised. Bob and I went out to San Francisco a few weeks ago; we had a speech out there. And we went to see Mark Felt, and we had a kind of wonderful couple of hours with him. He knew we were coming; he was looking forward to it. But he had been very ill, and it was a kind of closing of the circle, and it was a wonderful experience.

AM: Was that the first time you had met him in person.

Bernstein: First time I had met him, yes. Bob had met him as a young ensign in the Navy, when he was a messenger at the Pentagon and had renewed the acquaintance.

AM: So what did you think of him when you met him?

Bernstein: First of all, I was aware that he was 95 years old and in the last stages of his life. But I was amazed at his relative vigor given the fact that he had been quite ill. I was also surprised that there were some moments of clarity, because he had dementia.

AM: His family, when the news came out in 2005, declared him to be an American hero. Would you agree?

Bernstein: Obviously he is. Look, Watergate was a constitutional crisis in a criminal presidency. And he had the guts to say, "Wait. The Constitution is more important in this situation than a president of the United States who breaks the law." It's an important lesson, I think, for the country and for people in our business, as well.