(CNN) -- W. Mark Felt, who leaked information to reporters under the moniker, "Deep Throat," about the Watergate break-in, died Thursday at the age of 95, sources told CNN. 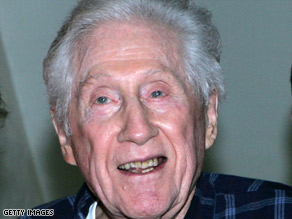 Felt admitted in a 2005 Vanity Fair article he was the Washington Post's source for many of its 400 stories on the Watergate affair during the early 1970s. The Watergate break-in eventually led to the 1974 resignation of President Richard Nixon.

"I'm proud of everything that Deep Throat did," Felt, 92, told CNN's "Larry King Live" in 2006, his first public interview on the subject.

Felt's entanglement with history occurred in 1972 after the bungled break-in at the Democratic National Party offices in the Watergate hotel. Felt, an associate director at the FBI, said he was unhappy with the way the administration meddled with the investigation into the break-in, which led him to divulge information to the newspaper.

Watch how Felt played a pivotal role in presidential history »

Carl Bernstein and Bob Woodward, then-rookie reporters with the Washington Post, did stories about the break-in and subsequent cover-up. Both men credited Felt for helping them, but Bernstein said Felt was a tough interview.

"He didn't leak. He had to really be squeezed," Bernstein said in a 2006 interview. "He confirmed mostly what we had gotten elsewhere. He didn't want to volunteer a lot of information, yet his role was essential in giving us a solidity and a knowledge that what we were reporting was right."

When King asked Felt whether he felt he had done anything wrong in going outside approved channels to get information out, Felt was unequivocal.

"I thought I was doing the right thing," he said.

Felt, who retired from the FBI in 1973, had his own legal problems. He was convicted in 1980 on conspiracy charges for authorizing government agents to break into homes without search warrants in a hunt for bombing suspects in 1972 and 1973.

When the case went to trial, former President Nixon testified on Felt's behalf. Felt was eventually pardoned in 1981 by President Ronald Reagan.