(CNN) -- The president-elect's senior adviser said that while Barack Obama is monitoring the situation in Gaza closely, "the fact is that there is only one president at a time." 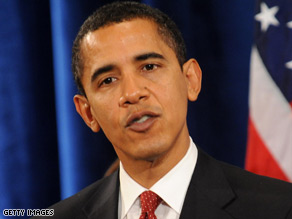 "There's only one president who can speak for America at a time. And that president now is George Bush," senior adviser David Axelrod said in an interview that aired Sunday on CBS' "Face the Nation."

Israeli airstrikes continued pounding targets in Hamas-ruled Gaza on Sunday, in what Israel said was a response to escalating rocket attacks against southern Israel.

The fighting ignited eight days after a six-month Egypt-brokered cease-fire between Hamas and Israel expired.

Palestinian security sources said Sunday that at least 277 people had been killed and hundreds wounded.

Obama spoke with Secretary of State Condoleezza Rice on Saturday about the violence in Gaza, two transition aides told CNN.

Asked whether Obama takes on a passive role when talking to Rice, Axelrod said, "I would hardly describe him as passive."

"I think they have a good working relationship. And there's a -- I think the calls are largely in the area of fact-finding for him," he said.

"But I think he wants to get a handle on the situation, so that, when he becomes president on January 20, he has the advantage of all the facts and information leading up to that point."

"The president-elect appreciated the call and the information from Secretary Rice," one aide said Saturday. "He will continue to closely monitor these and other global events."

Obama has pledged to make Middle East peace a priority from the beginning of his presidency. Arab states are calling for a more even-handed approach than what they consider the pro-Israel tilt of the Bush administration, but Israel is expecting Obama to stay true to the pro-Israel posture he showed during the campaign.

Asked if he anticipates that the Obama administration would be just as supportive of Israel as the Bush administration has been, Axelrod said Obama "recognizes the special relationship between United States and Israel."

One analyst of the Israeli-Palestinian conflict cautioned against holding the incoming administration to "dangerously high" expectations.

"I think the tone of American politics will change: You're going to get a serious effort on behalf of the new administration," said Aaron David Miller, a public policy scholar at the Washington-based Woodrow Wilson International Center and a former adviser on Arab-Israeli relations to six secretaries of state.