(CNN) -- After weeks of criticism that she was being too elusive, Senate hopeful Caroline Kennedy is now talking about why she believes she is the best person for the job. 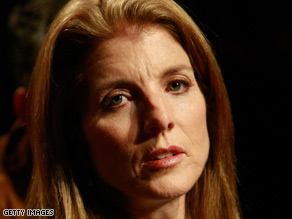 Caroline Kennedy says she is the best person to replace Hillary Clinton in the Senate.

In a media blitz this weekend, Kennedy sought to explain what sets her apart from the handful of other people being considered for Hillary Clinton's Senate seat.

"I would be an unconventional choice -- I haven't followed a traditional path, but I think I bring a lifetime of experience to this," she told NY1.

She also told The New York Times that "there's a lot of different ways that people are coming to public life now, and it's not only the traditional path."

Asked if she thinks she's the best fit, Kennedy told the Times, "Well, I wouldn't be here if I didn't think I would be the best."

New York Gov. David Paterson has the sole responsibility of picking Clinton's replacement. His pick would serve for two years before running for election in 2010. If the candidate won that contest, he or she would have to run again in 2012, when Clinton's term ends.

If Paterson selects Kennedy, it would mean the continuation of a Kennedy legacy in the Senate that began 56 years ago with the election of her father, John F. Kennedy, as the junior senator from Massachusetts.

But some are questioning whether she's ready to follow the path taken by her father and her two uncles.

Watch Kennedy explain why she should be in the Senate »

Kennedy, 51, has been involved in education reform and women's issues but has never held public office and has mostly stayed out of the public spotlight.

Hank Sheinkopf, who worked for President Bill Clinton's 1996 re-election campaign, said name recognition does not make Kennedy qualified for the job. "Does she have name recognition? So does Jennifer Lopez," Sheinkopf said.

"The Senate seat is not a legacy place. We haven't had a Kennedy elected to office from New York state since 1964, and a lot of people would like to keep it that way," he said, referring to Caroline's uncle Robert Kennedy.

Kennedy has insisted that she brings more to the table than her name.

"If my last name was not Kennedy, maybe I would have run for office a long time ago," she told NY1. "I'm proud of my family tradition. It means a lot to me. That's something that I want to live up to, and that's why I feel that I've been preparing myself to do this. But it isn't fundamentally about me -- it's about who can do the best job for the people of New York -- who Gov. Paterson thinks can do the best job for delivering for the people of New York."

But now that she is publicly seeking the seat, her name does make it easy for her to get attention, according to Lynn Sweet, the Washington bureau chief for the Chicago Sun-Times.

"This is the megaphone of the Kennedy celebrity. This is one -- this is the most famous political family in America, the legendary family," she said.

"What's interesting here, one of the other people who would like to be appointed, Attorney General Andrew Cuomo, he comes from another big New York political family, but, yes, it's hard even for him even to be heard."

Cuomo is the son of former New York Gov. Mario Cuomo. He is one of New Yorkers' top choices for the seat, according to recent polls.

The CNN/Opinion Research Corporation survey, released Monday, also shows a gender gap -- with 57 percent of women saying she's qualified, compared with 47 percent among men. The survey's sampling error is plus or minus 3 percentage points.

"Men may think of qualifications for public office in terms of work experience, while women may be looking at a candidate's life experience," said CNN polling director Keating Holland. "Caroline Kennedy has a personal history that may be compelling to many women, but her résumé is not very long, and that may be a mark against her to some men."

The mother of three has spent most of her life in New York City, working there after graduating from Harvard, meeting her husband, Edwin Schlossberg, on the job at the Metropolitan Museum of Art and attending Columbia Law School there.

Her most prominent public roles to date involved overseeing her father's presidential library and presenting the annual Profiles in Courage Award.

Most of her leadership positions have been based in the arts: hosting the annual nationally televised Kennedy Center Honors in Washington and serving as the honorary chairwoman of the American Ballet Theatre, as her mother had.

Sweet, of the Sun-Times, said there's no clear path to the Senate, so it's hard to compare résumés for the job.

"We know that people come to this from all walks of life. There is no one qualification for Senate," she said.

Kennedy has said she's always considered political office, but was finally moved to action after working on President-elect Barack Obama's presidential campaign. She endorsed Obama early in the campaign and served on his vice presidential search team.

Paterson has said he will not appoint Clinton's replacement until the seat officially becomes vacant.

All About Caroline Kennedy • David Paterson