Commentary: Holocaust love story an insult to the survivors

Editor's note: Deborah E. Lipstadt, Dorot professor of modern Jewish and Holocaust studies at Emory University, is the author of "History on Trial: My Day in Court with David Irving." She was the target of a British libel lawsuit by Irving, a historian she said had become a spokesman for Holocaust denial. Lipstadt won the case in April 2000. Read her blog here 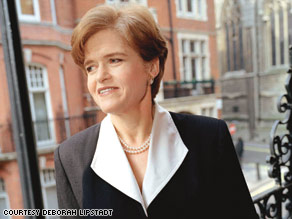 (CNN) -- I don't know whether to be sad or angry -- or both. The recent exposé of the fact that Herman Rosenblat's Holocaust memoir is a hoax was no surprise to me. From the first time I heard the story of his "miraculous" survival during the Nazi era, I doubted that it could be true.

Rosenblat's claim that, as an inmate in a Buchenwald sub-camp, he had survived because a young girl had tossed an apple over the fence each day for seven months just did not seem credible to me.

The notion that a concentration camp inmate could approach the fence without the SS shooting him beggared the imagination. I could not believe that a little girl whose family was supposedly passing as non-Jews would allow their daughter to engage in such an act.

The fairy tale nature of the incident was enhanced by the supposed reunion of the couple on a blind date years later when both had moved to America. The story was that they discovered each other's true identity and, after a whirlwind romance, decided to marry.

Survivors who had been in the camp with Rosenblat and had kept in touch with him since the end of the war protested that the story could not be true. They wondered why Rosenblat had never mentioned the incident until the late 1990s.

A number of other historians shared my doubts, which I posted on my blog. As one of the first to express skepticism about this, I became the target of attacks from those who thought I was demeaning the Rosenblats.

We doubters could not, however, initially overcome the power of Oprah, on whose show Rosenblat and his wife appeared twice. Credulous reporters, who should have sought some form of verification, kept writing about this "miraculous" event.

The producer who acquired movie rights tried to intimidate those of us who raised questions. He wrote to me saying, "I have traveled all over Eastern Europe for several years in preparation for what will be a major feature film. I may be more of a Holocaust expert than you, even though, I have no title nor university affiliation. What I do know for sure is before I make any statements I know the facts. You simply do not know those facts, and that Deborah, is the greatest sin to the memory of all those perished so long ago."

The publisher refused to let anyone see the book. Public relations people circulated versions of the story urging recipients to send it on so eventually it would reach millions of people.

Slowly, thanks to the power of the Internet and the work of some intrepid historians, the hoax was exposed. The publisher pulled the book. The movie producer cried foul, presenting himself as a victim who had been duped.

This is not the first time such a hoax has been perpetrated. Most of the previous stories have been spread by people who were passing as survivors. In contrast, the Rosenblats were both survivors of the Holocaust. But that fact has now been lost in the shuffle.

What, then, is the danger of these sorts of hoaxes? First of all, they give ammunition to Holocaust deniers. This is a bonanza for them.

Deniers expend great efforts in trying to implant doubts in young people about the veracity of the Holocaust. They spend so much energy attacking "Anne Frank: The Diary of a Young Girl" because it is a book that is widely read by young people.

The fact that this "apples over the fence" story has already been published as a widely successful children's story provides the deniers with a great opportunity to peddle their wares.

However, the danger posed by deniers is not the primary reason why such fabricated stories should be exposed. The events of the Holocaust are horrible in and of themselves. They do not need to be aggrandized or exaggerated to be made to sound any worse than they were. They also do not need to be rendered as joyful love stories that make us feel good about what happened.

Both are insults to the survivors and inimical to the pursuit of historical truth. The optimum way of teaching about the Holocaust and presenting its history is, to quote Detective Joe Friday from the old TV show, "Dragnet," "just the facts, just the facts."

What we need, particularly in relation to something as mind-boggling as the Holocaust, are "just the facts."

The opinions expressed in this commentary are solely those of Deborah Lipstadt.

All About The Holocaust • Oprah Winfrey • Anne Frank