WASHINGTON (CNN) -- A national poll suggests that three-quarters of the public thinks President-elect Barack Obama is a strong and decisive leader, the highest marks for a president-elect on that characteristic in nearly three decades. 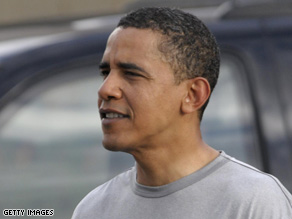 A new poll shows that President-elect Barack Obama is viewed as a strong, confident leader.

"That's the best number an incoming president has gotten on that dimension since Ronald Reagan took office in 1981," CNN Polling Director Keating Holland said. "The public's rating of his leadership skills is already as high as George W. Bush's was after 9/11 and easily beats the numbers that both Bush and Bill Clinton got at the start of their first terms in office."

Watch how Obama compares with his predecessors »

Eight in ten Americans said Obama inspires confidence, can get things done and is tough enough to be president, three characteristics Americans look for in a leader and the three qualities on which Obama got his highest scores.

He also gets higher marks than Bush did in 2001 on honesty, values, issues, management abilities and compassion.

The 67 percent of those polled who say they admire Obama -- his worst score -- is roughly the same as the highest that Bush got on a similar battery of questions just after he took office in 2001.

"But it is Obama's ability to inspire confidence and the perception that he is tough enough for the job that may be most important for him as the country faces fresh challenges abroad and a historically harsh economic downturn," Holland said.

The CNN/Opinion Research Corp. survey was conducted December 19-21, with 1,013 adult Americans questioned by telephone. The survey's sampling error is plus or minus 4.5 percentage points.

But while Bush enjoyed high approval ratings in his first term, things dramatically changed over his eight years in office.

A CNN/Opinion Research Corp. poll released December 26 showed that 75 percent of those surveyed were happy to see Bush leave office.

"Earlier this year, Bush scored some of the lowest presidential approval ratings we've seen in half a century, so it's understandable that the public is eager for a new president to step in," Holland said.

The portion who say they won't miss Bush is 24 percentage points higher than the 51 percent who said they wouldn't miss Bill Clinton when he left office in January 2001. Forty-five percent of those questioned at that time said they would miss Clinton.

The poll indicated that Bush compares poorly with his presidential predecessors, with 28 percent saying he's the worst ever. Forty percent rate Bush's presidency as poor, and 31 percent say he's been a good president.

Only a third of those polled said they want Bush to remain active in public life after he leaves the White House. That 33 percent figure is 22 points lower than those in 2001 who wanted Clinton to retain a public role.

The December 26 poll was conducted December 19-21, with 1,013 adult Americans questioned by telephone. The survey's sampling error is plus or minus 3 percentage points.