LONDON, England (CNN) -- For Roland Emmerich, the easy choice would have been to join the family business. 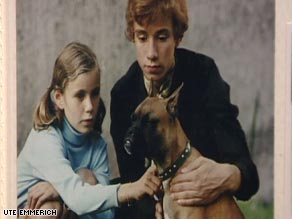 Roland Emmerich and his younger sister Ute as children in Germany. They now work together in Hollywood.

His father had founded a thriving garden machinery company, but young Roland's interest in lawnmowers, and their like, was limited.

"I knew very early that I didn't want to do that," Emmerich says. "But I also didn't know what I wanted to do, so I was dabbling in a lot of things. And then actually after a while, it slowly occurred to me that maybe film would be great."

He entered film school with the intention of becoming a production designer but came out a director.

"In film school, I had to make movies, so I made movies and was quite successful and all of a sudden I was a director."

The way he tells it makes it sound simple. And maybe it was.

He went to one of Germany's leading film schools, The University of Television and Film Munich, which boasts an impressive alumni of respected directors: Wim Wenders, Bernd Eichinger, Uli Edel and Florian Henckel von Donnersmarck, among others.

He had the backing of a loving family; according to his sister Ute his "very, very supportive" father lent him office space in his factory and helped finance his early films.

Nor was he the first German director to make it big in Hollywood; Ernst Lubitsch and Billy Wilder had well and truly paved the way.

What made Roland Emmerich different, and his Hollywood assent difficult, was his near obsession with special effects and monumental disasters; explosions, floods, tidal waves, and general destruction, both alien and earthly.

Not only were his films expensive to make, but gallingly for German critics they weren't, well, very German.

"I was making movies like I'm doing now, but it was like a whole different world at that time in Germany," Emmerich says.

So now he's making films in Los Angeles, where he has a home just a few minutes drive from Hollywood, and his younger sister Ute.

Roland gives Revealed a tour of his home »

"Ute was like me," Roland says. "She didn't want to work in the family company and it was a good opportunity to work for me, it was more exciting."

The siblings set up their own production company, Centroplis Entertainment, through which they've made 14 feature films.

The move to Hollywood came after Roland directed "Moon 44", released in 1990; a science fiction action film set in 2038 about robots, convicts and companies fighting over mining rights in outer space.

It earned him an invitation to Los Angeles and a job directing "Universal Soldier."

Ute remembers, "It was decided that we close our office [in Germany] and just try and see how it would work out for a year. Our parents, I think, were hoping that we would come back within a year, but eighteen years later, and so many movies and successes later, we are still here," she says.

Roland has made himself very much at home in Los Angeles. Ten years ago he bought a house -- his own slice of Hollywood history -- a three bedroom mansion built in 1919 by Jesse Lasky, who, with Cecil B. DeMille, produced "The Squaw Man," Hollywood's first feature film.

"I told Constance, my real estate broker, 'Look, don't come to me with something which doesn't have either Hollywood history or a really, really big garden'. I just wanted to have a big garden because I grew up in a house with a big garden."

In the end, he got both. The garden is an impressive oasis of towering palms, tangled vines and lush ferns, all lining an imposing staircase that leads to a pool where the director hosts parties for friends and colleagues.

While Hollywood has embraced Roland Emmerich's action-packed, effect-laden style of epic story-telling, the director is less than enamored with its lifeblood, the film industry.

"I don't really like the movie business, I have to say. It's a very cold, brutal business. It's not a cozy living. But, on the other hand, I really like making movies," he says.

"I'm constantly torn between, should I keep going or not. And then I always want to make another movie and then I have to deal with it. But every time I come into a situation, I'm always talking about early retirement, which makes all my friends laugh out loud."

They might laugh out louder if he ever contemplated a return to the family business.