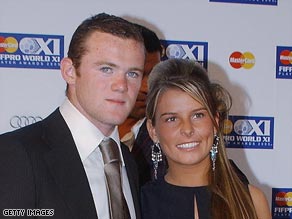 Wayne Rooney and Coleen McLoughlin are to be paid $5 million for the picture rights to their wedding.

The butterflies are reported to be the piece-de-resistance of England's most anticipated celebrity wedding of the year.

Wayne Rooney, the best English footballer of his generation, and Coleen McLoughlin, his High School sweetheart, were to marry in an estimated $10 million ceremony in Italy Thursday.

As they kiss, guests are apparently meant to open boxes and release the butterflies. The moment has been pilloried widely in the British media, tacky and over the top they all think, but is it just sour grapes?

It has been a long and, at times, bumpy road for the couple to the altar. One littered with fierce criticism from the British press, which has enjoyed nothing more than lampooning Rooney and McLoughlin for being 'common.' The Daily Mail once even asked: "Is this Britain's ghastliest couple?"

Rooney has been dubbed "Shrek" and "Mr Potato Head" due to his looks and his background as the son of a school dinner lady who grew up on a council estate is often referred to in a disparaging way.

McLoughlin, meanwhile, has been subjected to page upon page of bitter stories about her weight, shopping sprees and her lack of closeness to Victoria Beckham.

There has also been fierce criticism over the fact she has managed to become a millionaire in her own right. It's all down to Rooney apparently, and nothing to do with her appearing to be quite a decent person, who did well at school and has cleverly managed to parlay some of her fame into various media and advertising projects.

Anyone who has seen her television show -- Coleen's Real Women -- can see she is a decent, bubbly person, who is very good at putting people at ease.

Much to the media's fury, the couple have sold the rights to cover the wedding to OK magazine for a record $5 million. However they're not pocketing all the cash themselves, with an undisclosed sum from the fee to be donated to the Claire House children's hospice in Cheshire -- where McLoughlin's disabled foster sister Rosie is cared for.

The queen's grandson, Peter Phillips and his bride Autumn Kelly, recently received $1m from Hello magazine to cover their wedding but they didn't receive an eighth of the opprobrium now directed at the more generous, but lower class, Rooney and McLoughlin.

Moreover, in lieu of presents, Rooney and McLoughlin have also asked guests to donate money to the Alder Hey children's hospital in Liverpool.

The wedding might be over the top, with a private yacht and luxury jet for guests (they are covering the guests' costs), expensive plonk and a $200,000 wedding dress, but at least the couple have worked hard for what they have.

Their success despite a working-class background appears to be the greatest source of frustration for critics. It's just not on that someone who wasn't born into privilege and didn't go to a posh school can enjoy their wealth. That would be ugly.

If anything, the couple's relationship and success is a triumph over adversity.

They have known each other since McLoughlin was 12, but she spent two years fending off Rooney's entreaties to go out on a date.

He finally got his chance when he saw her struggling to fix a broken bicycle chain. He rode over to help, popped the question again and got a yes.

Surely they should be congratulated for creating their own modern fairytale complete with butterflies?