The discs that come in boxes: A gift guide

(CNN) -- Perhaps it should come in a bowling bag. 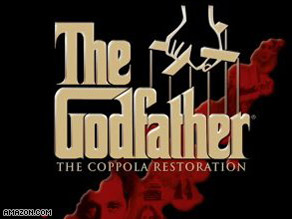 Movie lovers can enjoy a newly remastered set of "The Godfather" saga.

But "The Sopranos: The Complete Series" is much more elegantly presented than that.

The box set, which weighs a little under 10 pounds, features its 33 DVDs and CDs (yes, the show's soundtrack albums are included) comfortably ensconced in heavy cardboard black pages and comes complete with an episode guide, collector's album and video extras.

It is, one hopes, the last word in Bada-bingness ... though some carpers are already wondering where the Blu-ray edition is. (They probably also would like a replica of Ralph Cifaretto's head, which isn't available from the HBO store -- though a "Sopranos" bowling bag is.)

If "The Sopranos: The Complete Series" is the jewel among this season's box sets, it is far from the only example of what's become a prime gift for the gift-giving season.

On the DVD side, movie lovers can enjoy a newly remastered set of "The Godfather" saga or the routinely excellent releases by Pixar studios.

And as far as music is concerned, such names as Genesis, Led Zeppelin and Nina Simone have received the box set treatment -- in the case of the first two, remastered editions of complete albums. Moreover, one of the all-time classics -- Miles Davis' "Kind of Blue" -- is out in a 50th-anniversary set, complete with a 180-gram blue vinyl pressing LP. Not exactly that beat-up version you found in a used-record shop when you were 19 and first fell in love with "So What."

So if you're looking for a box of silver discs for the holidays -- or any old time -- here are a few to consider.

All About Music • Movies