(CNN) -- Japanese writer and director Hideo Nakata has been hailed as the modern master of macabre. 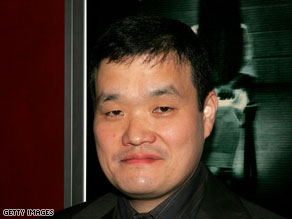 The master of macabre, Hideo Nakata didn't start out in film aiming to make horror movies.

His 1998 film "Ringu" -- adapted from a novel by Suzuki Koji, the Japanese Steven King -- redefined the horror genre, propelled Nakata into the international spotlight and soon had Hollywood calling.

Born in Okayama, Japan, in 1961, Nakata enrolled at the University of Tokyo to study journalism.

On graduating he went on to work in Japan's Nikkatsu Studios, the same place where renowned director Akira Kurosawa started out. He didn't' start out aiming to make horror films, but it was Nikkatsu Studios that Nakata met Hiroshi Takahashi, the screenplay writer for "Ringu."

An international hit, "Ringu" centers on a cursed videotape that kills whoever watches it.

It appeared in cinemas at the same time mainstream western horror films were churning out gruesome violence as the means to get audiences hiding behind their popcorn.

Nakata's artfully directed and terrifying film was a nether-world away from these schlock horror and slasher flicks, instead utilizing suspense and a pervading sense of dread.

Western audiences expecting to watch good-looking teenagers getting chopped up in a blizzard of gore were treated to something much creepier.

For Hollywood producers, Nakata has been a gold-mine of remake material. If dread is the word that has become synonymous with Nakata's work, there was a great sense of it among many of Nakata's fans when it was announced that there would be a Hollywood remake of "Ringu," starring Naomi Watts.

Despite fans claiming that the terror of the original was lost in translation, Nakata himself was given the opportunity to direct the Hollywood sequel, "The Ring 2," in 2005.

The series' success has spawned a third installment, due to be released in 2009 that Nakata will also be directing.

Shunning computer generated monsters or gallons of fake-blood and guts, "Ringu" and other Nakata films including "Dark Water," which was also remade by Hollywood in 2005, use glimpses of mysterious abstract images -- a reflection in a TV screen, an unsettling, spreading damp patch of water -- to ratchet up the terror.

Fans and critics have compared the chilling atmosphere of his films with that of Roman Polanski's work, in "Rosemary's Baby" and "The Tenant."

Nakata then has been credited with turning on a whole new audience to Asian horror films with an altogether more subtle approach to scaring the wits out of people.

He reveals the finer points of his scare tactics to Anjali Rao on Talk Asia this weekend. E-mail to a friend

All About Horror Films • Entertainment