You either love or hate my movies, says Tarantino 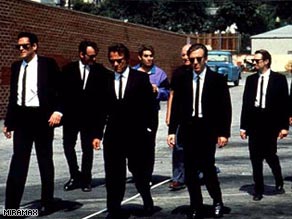 "If you do this in real life, they're going to fire your ass," scolded cinematographer Stephen Goldblatt, veteran of films like "Lethal Weapon" and "Charlie Wilson's War."

The novice filmmaker was participating in a directors' workshop at the Sundance Institute -- the film trust founded by Robert Redford which also runs the Sundance Film Festival.

Unfortunately, Tarantino's mentors were just not feeling his experimental approach.

Tarantino and his editor steeled themselves for the inevitable disapproval: "Then Terry Gilliam comes in and goes 'Oh, your scene. Just great!'" recalls the director.

He is talking at the Cannes Film Festival Cinema Masterclass, following in the illustrious footsteps of directors like Wong Kar Wai, Sydney Pollack and Martin Scorsese.

"It was just like, you know what, that's gonna be my career. People are gonna either really like me or they're really not and just get f***ing used to it 'cause this is the deal," Tarantino says.

A second visit to Sundance in 1992 proved more fruitful. His debut feature, "Reservoir Dogs," a sassy, hyper-violent gangster movie, was the hit of the year.

French film critic and regular on the European film festival circuit, Michel Ciment still remembers the effect it had on him when it showed at Cannes later that year: "It was a big shock. I remember it was the most striking new American film since 'Mean Streets' 30 years before."

Despite the impact of his droll, assured debut, Tarantino recalls being convinced he was going to get fired in the first two weeks of production.

"I just thought it was too good to be true. I couldn't help but think something like 'they don't let people like me make movies,'" he says, laughing.

Follow-up movie "Pulp Fiction" was awarded the coveted Palm D'Or at Cannes two years later, cementing his reputation as a movie-maker to be reckoned with.

It was filled with the dark humor and bloody violence that would become known as Tarantino trademarks.

The B-movie-obsessed director admits to getting a kick out of creating humor in inappropriate situations.

"I'm trying to get you to laugh at things you've never laughed at before," he explains.

He cites his "bigtime" influences as movie brats like Martin Scorsese and Brian De Palma, as well as Sergio Leone and Howard Hawks.

In person, he is a great raconteur and his expletive-littered speech is not a million miles away from the dialogue that's so central to his movies.

"I tend to think of myself as more of a novelist who makes movies than a director per se," he declares.

But he dismisses his apparent love of language as a product of writing for acting classes: "I started writing as an actor and it was all about dialogue and writing scenes to do."

Before moving into directing, Tarantino studied acting for six years and says learning to act for the camera gave him an insight into how directors put a movie together -- frame by frame. That was what really taught him how to write for the movies.

"All of a sudden I started seeing [film] in a whole different way. When you start doing that, then it's only a few short steps until you start composing shots of your own," he explains.

Tarantino has shown himself to be one of the most music-savvy directors of this generation with his use of songs like "Little Green Bag" by the George Baker Selection in the opening sequence of "Reservoir Dogs" and Nancy Sinatra's "Bang Bang (My Baby Shot Me Down)" in "Kill Bill Vol. 1." He, not immodestly, puts that skill down to his great music collection.

"The thing is, I have one of the best soundtrack collections in America," he boasts.

That probably accounts for his scathing determination never to use film composers: "I don't trust any composers to do it. I would just never give anybody that kind of responsibility," he says, "Who the f*** is this guy coming in here, throwing their s*** all over my movie?"

And he admits that his inner film buff enjoys the cornerstones of action cinema that some of his later movies have explored.

"I love action scenes, but they are hard, and in a way that's what's fun about them. These cool little puzzles. To me, action scenes are some of the most cinematic moments that you can do in film," he says.

When he started filming "Vol. One," Tarantino hadn't made a film for six years and with typical chutzpah challenged himself to choreograph astonishingly intricate fight scenes.

"If I throw my hat in the ring with the greatest action directors who ever lived ... I wanna be as good as them," he asserts.

He continues to work his way through his action movie checklist.

In his latest movie, "Death Proof," a homage to sleazy 70s B-movies that stars Kurt Russell as a murderous stuntman, he puts his own spin on another of action film's fundamentals -- the car chase.

Tarantino is critical of CGI being used so much in film today. All the seat-grippingly tense stunts in "Death Proof" are real and he specifically cast a stuntwoman, Zoe Bell, in one of the leading roles to achieve this.

It may have been ambitious, but "Death Proof," which is one half of "Grindhouse," a B-movie-referencing double bill he made with fellow director Robert Rodriguez, got a critical mauling and didn't fare much better at the box office.

But then Tarantino has long been resigned to people either loving or hating his movies.