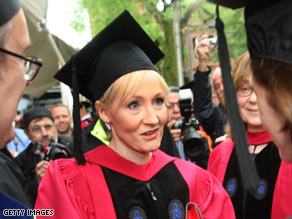 The prequel is hand-written and signed by the author, according to Waterstone's, a large bookstore in central London that hosted the event. It finishes with the words, "From the prequel I am not working on -- but that was fun!"

Waterstone's plans to display facsimiles of the cards at all its stores in Britain and online shortly after the auction, and a printed book featuring cards from all authors participating in the auction will go on sale in August, the store said.

The proceeds will go to Dyslexia Action and English PEN, a writers' association. Other authors include Margaret Atwood, Sebastian Faulks, Nick Hornby, and Tom Stoppard.