(CNN) -- Pictures of Brad Pitt and Angelina Jolie's newborn twins have been published for the first time after a magazine bidding war which news agencies claim topped $14 million. 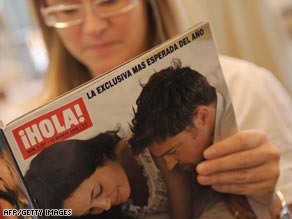 Hola! magazine, the Spanish sister publication to Hello!, has also published images of the Jolie-Pitt twins.

Hello! magazine, which won international rights to the images, and People magazine, which took U.S. rights, published the photographs in their latest editions, which hit newsstands Monday.

The two publications, which have previously secured image rights to the couple's elder children, are believed to have shared the costs, The Associated Press reported over the weekend.

The agency quoted an unnamed source, not authorized to speak about the deal, as saying the pictures had fetched $14 million.

The images show the couple, newborns Knox Leon and Vivienne Marcheline and the rest of the Jolie-Pitt family -- Maddox, 7, Pax, 4, Zahara, 3, and Shiloh, 2.

The twins were born by Cesarian section at the Lenval hospital in the French Riviera resort of Nice on July 12.

Hello! magazine, which heralds its coverage as the "biggest exclusive of the year," devotes 17 pages of coverage to the twins' arrival.

In an interview published in the magazine, Jolie says: "Wanting a big family is one of the things that brought Brad and I together."

Pitt adds: "When Ange and I were told we were having twins we burst into hysterics... We didn't see this one coming."

Watch why the photos went for so much money »

Larry Hackett, the managing editor of People said that it was "thrilled" to have carried the images. People, like CNN, is owned by Time Warner.

Jonathan Klein, co-founder and CEO of Getty Images, which organized the photo shoot, said that all the proceeds would go toward the Jolie-Pitt Foundation, which earlier this year donated $1 million to help children in Iraq.