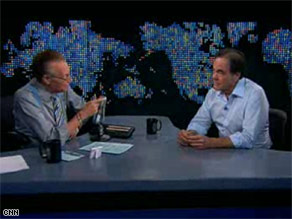 Director Oliver Stone, right, told Larry King there is no "hate or malice" in the movie "W."

Stone, whose film opens October 17 -- less than three weeks before the November 4 presidential election -- said he was fascinated by Bush, "a bum at the age of 40 years old."

"He turned his whole life around and through evangelism and through his faith and his family and he became president," Stone said.

"It's a great fantasy and it happened. It's bigger than fiction," said Stone.

Stone said while he supports Sen. Barack Obama, the Democratic nominee in the presidential race, his personal politics didn't influence the film.

"I couldn't make a movie with hate or malice. There is none in this movie. I see the guy as more like John Wayne, which is to say I don't like his politics but he's endearing in a strange, goofy, awkward way, and he did capture the imagination of the country," he said.

Stone, a Vietnam veteran, is known for his critically acclaimed, yet politically charged films. He's received Best Director Oscars for "Platoon," which also won an Oscar for Best Picture (1986), and "Born on the Fourth of July" (1989). He also won an Academy Award for his screenplay adaptation of "Midnight Express" (1978).

From "JFK" to "Natural Born Killers," Stone's films have made him a lightning rod for controversy -- and "W" is unlikely to change that. In the film, he draws a contrast between President Bush and his father, former President George H.W. Bush, whom Stone says was a "far more diplomatic" commander in chief.

"We went to war in Iraq and he did not go all the way," referring to the elder Bush. "So that becomes a big issue in the movie. He didn't get rid of Saddam then and the son has to be -- feels that he has to act stronger than the father because of emotional reasons and there's a lot of father-son subcurrent in the movie. He is challenged by his father and he wants to outdo him, he wants to be stronger than him."

Stone and Bush started their freshman years at Yale University together, but Stone said he didn't graduate with Bush because he went to Vietnam. "I met him years later," Stone said.

"I think she's -- she's along the lines of 'Dubya' [George W. Bush] a bit. That same kind of folksy, common man approach," he said. "And she -- it got Dubya elected. He did very well with that."

And, even though he and McCain are both Vietnam veterans, he opposes McCain's views on war and disagrees with the candidate's positions on Iraq and Afghanistan.

Still, Stone said, "Whoever wins this, Obama or McCain, it's going to be living in the shadow of Dubya. I think he changed the world. I think we're going to be with him for a generation."

Stone noted that Bush has earned a historically low approval rating -- only 24 percent, according to the most recent CNN/Opinion Research Corporation poll. "He's a young man, Mr. Bush. He's not -- he's not leaving the scene. He may have low polls, but he's going to be around."