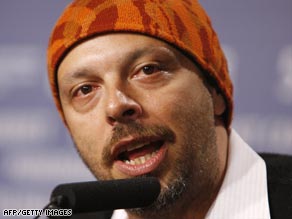 The director of "Elite Squad" stirred controversy when his action thriller premiered at the Berlin International Film Festival earlier this year.

The movie tells the story of an elite police squad that employs a no-holds-barred approach when it comes to battling the drug gangs who control Rio de Janeiro's slums, known as favelas.

Told from the perspective of a member of Rio's State Police Special Operations Battalion, or BOPE, Padilha's film has elicited criticism for its extreme violence and what some say is a glorification of ruthless police tactics.

Padilha, who co-wrote "Elite Squad" with "City of God" screenwriter Braulio Mantovani and Rodrigo Pimentel, a former BOPE captain, says he wanted the film to explore the roots of police violence and corruption in Brazil.

The movie, which casts light on the vicious cycle of violence in Brazil, "is basically about how the police institution turns individuals into corrupted cops or violent cops," Padilha told CNN.

"Elite Squad," or "Tropa de Elite" in Portuguese," is one of the harshest Brazilian slice-of-life movies since Fernando Meirelles's 2002 drama "City of God." The violent tone of Padilha's film contrasts sharply with other recent movies chronicling favela life.

Walter Salles offers a somber look at Sao Paulo's underclass in "Linha de Passe," which was released earlier this year. The film from the director of "The Motorcycle Diaries" and "Central Station" depicts the lives of four brothers and their mother as they struggle to overcome their circumstances.

Meanwhile, Lucia Murat's "Mare, Nossa Historia de Amor" (2007), or "Mare, Our Love Story," sets the tale of Romeo and Juliet in a Rio slum and tells the story of gang warfare through music and dance.

Padilha started out making "Elite Squad" as a documentary. But the members of the police who he interviewed for research didn't want to appear on screen so he decided to turn it into a fictional movie instead.

The movie was filmed in the favelas, and people on the street offered input as the scenes were shot, Padilha said. Shooting in the slums added to the grim realism of the movie, but the undertaking wasn't without its own perils.

At one point during the shoot, a car containing fake guns and five crew members was hijacked by armed drug dealers. (The crew members were eventually released and a police raid ensued.)

Rio's slums are, for the most part, populated by honest people striving to survive by honest means, Padilha told CNN. "But unfortunately, favelas have small groups of heavily armed drug dealers that control the life of everyone there. They are the rulers, they are the judges and they can kill you and that's it."

"Elite Squad" became the focus of heated debate when it was released in Brazil last October, prompting discussions about acceptable thresholds of police violence. (The police in Brazil even went as far as trying to get a court order to ban the film.)

Those efforts failed, and the film went on to achieve commercial and critical success. It became the most popular film in Brazil last year and took home the Golden Bear, the top prize at the Berlin festival, in February.

The drama, which raises challenging questions about the problems confronting Brazilian society, is not the first time Padilha has tackled tough issues on film.

He earned acclaim for his 2002 documentary "Bus 172" about the true-story hijacking of a Rio bus by a former street child.

"In that documentary I told how or why the street kid became so violent and I said basically that it is the way the state restricts small time criminals -- by torturing, by killing, by putting them in crowded jails," Padilha said.

"Elite Squad" follows a similar vein. It takes the same idea but applies it to the police.

"The bottom line is we are trying to say that the whole violence that goes on in Rio is mainly caused by ourselves and we can possibly undo that," he said.