(CNN) -- Is the movie cop thriller heading for retirement? 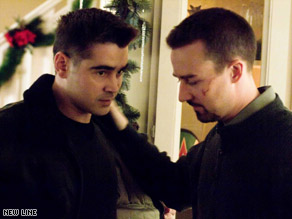 It seems incredible to suggest that such a popular form of storytelling might be on the way out, but it's happened before: Musicals and westerns were once staple entertainment for the moviegoing masses, and somewhere in the 1970s they just went thataway. Now the musicals and westerns that emerge are considered unusual.

So consider: Last week the top box-office draw in the country was "Max Payne" with Mark Wahlberg as an obsessed cop tracking down the killer who murdered his wife and child. Based on a video game, "Max Payne" takes a rudimentary plot and boils it down still further, to the point where it's worse than predictable. The film's attraction (such as it is) isn't found in story, but in decoration: the blue-filtered chiaroscuro and etch-y comic book compositions, how the snow glints under the streetlights.

"Pride and Glory," on the other hand, is resolutely old school. Not only is it not based on a video game, it's hard to imagine that any of the characters has played one -- or seen a movie either.

Watch behind the scenes at "Pride and Glory" »

The time period isn't specified, but it seems to be today, going on 1974. Written by "Tumbleweeds" director Gavin O'Connor and Joe Carnahan ("Narc"), based on a story O'Connor put together with his twin brother Greg and ex-New York cop Robert Hopes, this is one of those movies that wants to emulate the serious side of '70s cinema, to dig into thorny ethical quandaries and alert us to institutional corruption.

Unfortunately, it does a poor job.

This time Edward Norton is the alienated cop, Ray Tierney. Like Max Payne, he's stepped away from the street to nurse his own grievances -- he bears an ugly scar down his cheek from an incident referred to only obliquely.

The details remain hazy, but it casts a "Chinatown"-size cloud over Ray and probably accounts for the state of his marriage -- which is over -- and the fact that he's sleeping on his dad's leaky sailboat.

There's considerably more plot in "Pride and Glory" than in "Max Payne," but it's only marginally less predictable. A shooting puts four cops down -- all of them from the command of Ray's brother Francis (Noah Emmerich). Francis is devastated, and the boys' father, Francis Sr. (Jon Voight), insists Ray must step up and take charge of the investigation.

The Tierney clan has another cop in the family: Jimmy (Colin Farrell) is married to their sister (Lake Bell). We soon realize Jimmy's hands are dirty. But what will Ray do about it?

If you've seen your Sidney Lumet movies -- "Serpico," "Prince of the City," "Q&A" -- then you'll be well ahead of the game. Even if you haven't, you'll have seen the cop shows that drew from them. Which is why almost every scene, every line of dialogue in "Pride and Glory" has the dull thud of cliche.

"We can't keep doing this," moans Ray's soon-to-be ex-wife. Any regular moviegoer will know exactly what she means: How many more times will we have to suffer this déja-vu?

Granted, originality isn't everything. Last year, James Grey's "We Own the Night" invested a very similar story with subtle character shadings and a subversive edge. What's most disappointing about O'Connor's capably acted but gloomy and portentous movie is how it shies away from any real complexity.

The Tierneys may have their faults, but the outsider, Jimmy, is the bad egg (we gather that much when he threatens a baby with a hot iron). When push comes to shove, the brothers do the right thing in a climax so stock you could use it to make gravy.

The old school was better than this. And, back then, it wasn't old either.

All About Colin Farrell • Edward Norton