The miracle of a classic movie resurrected

LONDON, England (CNN) -- While many films spend a brief period in the spotlight before fading into obscurity, there are some which seem to grow increasingly powerful over time. 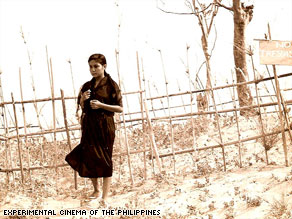 Nora Aunor stars in "Himala" as Elsa, a young girl who changes everyone's lives when she reveals her connection to the Virgin Mary.

Lost Filipino classic "Himala," is one such film that looks set for a revival over two decades after it was first released.

This comes as a late but significant accomplishment for the film which was made in 1982. "Himala" has won numerous awards in its native Philippines and remains the first and only Filipino film to have been shown in competition at the prestigious Berlin International Film Festival.

"Himala," which means "miracle" in the Filipino language Tagalog, tells the story of a poor provincial girl named Elsa who claims to have seen the Virgin Mary and then demonstrates the ability to cure the sick.

She takes on the persona of a saint, and her sudden fame brings about a rush of changes in her community, for both better and worse.

Scriptwriter Ricky Lee, based his story on a real incident on Cabra Island, in Mindoro Occidental, Philippines. In the late 1960s, reports of a young girl who had experienced visions of the Virgin Mary attracted salvation-seeking pilgrims and curious tourists in droves.

Lee wanted to create an unflinching depiction of the place of faith and religion in desperate and unforgiving times. Producer Charo Santos-Conci's first impression of the script was that the subject matter hit close to home for the Filipinos, who are mostly Catholic.

"This was a representation of how much faith really runs in the blood of the Filipinos," he said, "We're a very poor country and I think it's such a relief for us to know that this strong faith in each one of us is [what's] guiding us and propelling us to face all the challenges."

Lee and Bernal also collaborated closely, continuing to work on Lee's original script, reworking the film's characters to make them as real as possible.

Filming was completed in just a month in the arid, desolate area of Ilocos Norte in the northern Philippines, on a meager budget of just over $60,000. Ilocos locals with no acting experience were hired as extras to cut costs, and Lee remembers them as a genuinely wretched bunch who "knew how it was to suffer" and "to pray for a miracle."

Lee had insisted on having actress Nora Aunor, who was 29-years-old at the time, in the lead role. Apart from the rising star's talent, he saw parallels with Elsa in her.

"Her relationship with her fans was almost like the relationship of Elsa with her followers in the film and so I thought that it was a very strange and mysterious," says Lee.

And to add a supernatural twist to the film's history, Aunor says that she had dreamt of the Virgin Mary on the night before the part of Elsa was offered to her. Since then Aunor has become one of the Philippines' biggest superstars, though "Himala" is still considered her finest work. Your say: which classic movies do you think should be resurrected? Tell us below in the SoundOff box.

In her character's final speech in "Himala", which both Lee and Santos-Conci say is their favorite scene, she resolutely confesses to a motley crowd of worshippers that "there is no miracle." After telling the people to seek the truth within themselves, she is assassinated by a faceless follower.

"Long after the film was shown, I would talk to university students and they would always ask, 'So, who killed Elsa?'" says Lee of the climactic ending, which underwent several on-set rewrites.

Lee believes the film's message is still relevant today, particularly for Filipinos, because it confronts how easily people attach their faith to almost anything they think might ease their suffering in times of hardship and despair.

Whatever it is that audiences see in "Himala's" unique story, it would certainly seem that it is finally gaining the recognition it deserves.