'Che' film gets thumbs up in Cuba

HAVANA, Cuba (CNN) -- "Che" the movie met Che the myth in Cuba this weekend, and the lengthy biopic of the Argentinean revolutionary won acclaim from among those who know his story best. 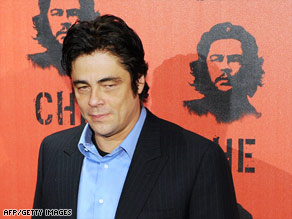 The movie was screened Saturday in the Yara movie theater in central Havana as part of the 30th International Festival of the New Latin American Cinema.

"Che" stars Oscar winner Benicio Del Toro in the title role, for which he won a best actor award at this year's Cannes Film Festival.

But it's one thing to make a movie about Ernesto "Che" Guevara and the Cuban revolution and show it in France, quite another to screen it in Cuba.

Speaking to CNN outside the Karl Marx Theater, the bilingual Puerto Rican actor admitted some anxiety.

"This is Cuban history, so there's an audience in there that probably, that could be the biggest critics and the most knowledgeable critics of the historical accuracy of the film," Del Toro said.

Watch Del Toro talk about the movie in Cuba »

It appears he needn't have worried.

"Del Toro personifies Che in a spectacular manner, not only his physical appearance but also his masterly interpretation," the state newspaper said.

After the showing, Del Toro characterized the public reaction as "sensational, a shot of adrenaline," Granma said. "The dream was to make this movie and to bring it here, where it all began."

The movie has two parts: "El argentino," which portrays Guevara's role in the 1950s Cuban revolution, and "Guerrilla," which shows Guevara's efforts in Africa and Bolivia, where he was killed in 1967. It was directed by Steven Soderbergh, who also directed Del Toro in the 2000 film "Traffic," for which Del Toro won an Oscar.

At 4 hours and 17 minutes, "Che" can test viewers' stamina. But that wasn't a problem in Havana.

It's a story Cubans know by heart. But this time, it's told by outsiders.

Catalina, a history professor who would give only her first name, was a tough critic.

"The movie is well-done. It has good intentions," she said. "But in my opinion, in the first part, the scenes in the jungle seemed a bit like a caricature."

Though some debated the details of this story they know so well, most -- like a young Guevara lookalike who identified himself only as Daniel -- were pleased.

"It has captured history to perfection," he said. "It has been well thought out and well-created."

Others, like student Susel Paraza, were torn about seeing their history told by others.

"What hurt me a little," she said, "is that it wasn't us, the Cubans, who thought to make a movie like this but instead a foreign director with foreign actors who have recreated this story very well."

Soderbergh's "Che" has been shown at six film festivals worldwide and will have a limited opening in the United States on December 12. It is scheduled for widespread U.S. distribution starting January 24.

Although many may not know Guevara's history, his image is recognized worldwide from a photograph taken by Alberto Korda at a Havana memorial service in March 1960.

Titled "Guerrillero Heroico" (Heroic Guerrilla), the image of a somber, long-haired and bearded Guevara wearing a beret with a lone star became what the Maryland Institute College of Art called "the most famous photograph in the world and a symbol of the 20th century."

The image has been emblazoned on everything from T-shirts to posters and even tattoos.

"There is no other image like it. What other image has been sustained in this way?" Trisha Ziff, the curator of an exhibition on the iconography of Guevara, asked in a 2007 interview with the BBC.

"Che Guevara has become a brand. And the brand's logo is the image, which represents change. It has becomes the icon of the outside thinker, at whatever level -- whether it is anti-war, pro-green or anti-globalization."

Guevara was 31 years old when the photo was taken. He has been dead for 41 years, longer than he was alive.

Jonathan Green, former longtime director of the UCR/California Museum of Photography, has been quoted as saying, "Korda's image has worked its way into languages around the world. It has become an alpha-numeric symbol, a hieroglyph, an instant symbol. It mysteriously reappears whenever there's a conflict. There isn't anything else in history that serves in this way."