LONDON, England (CNN) -- The decision to make "Che" was an easy one, Benicio Del Toro says. Filming the movie was anything but. 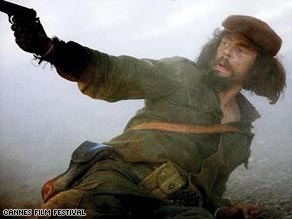 "I have to say it probably is the most difficult movie I've ever made, and I've made a few," Del Toro says of his starring role in director Steven Soderbergh's Spanish-language biopic.

One of Hollywood's most bankable stars, Del Toro has made a name for himself playing dark and brooding characters in movies like "21 Grams," "The Usual Suspects," and "Traffic," for which he won an Oscar.

He now adds to that list the role of revolutionary Ernesto "Che" Guevara, an Argentine doctor whose role in the Cuban Revolution in the 1950s vaulted him to cult status where he remains today.

To play the Latin American revolutionary, Del Toro says he had to start with the man himself rather than invent a character. He read what Che wrote and interviewed a range of people, including those who knew him when he was a child, as well as those who were there in his last days.

And then there were the countless photos of the iconic and controversial leader which he pored over. Looking at the pictures, seeing the attitude that he had in the photographs," he says, "I learned a lot from the photographs."

The meticulous study pays off on screen. Del Toro delivers a soulful performance that has earned him accolades. He won the Best Actor award at Cannes this year and he is being hotly tipped for another Oscar nod. Which films and actors do you think are contenders for this year's Oscars? Share your picks in the SoundOff below.

Che's life "is what movies are made of," Del Toro told CNN. The incredible story, along with the opportunity to work with Soderbergh, who directed him in 2000's "Traffic," for a second time drew him to the project.

The 41-year-old bilingual actor was born in Puerto Rico but grew up in Pennsylvania. It wasn't until he was in his early 20s and wandered into a bookstore in Mexico City that he discovered Che.

"I bought a compilation of his letters that he had written to his family and I read that book. I didn't know anything about this guy, so that started my journey," he recalls.

See how the movie was received in Cuba »

"Che" is split into two parts -- "The Argentine" and "Guerrilla." When shown in its entirety, the movie clocks in at a staggering 257 minutes. Part one charts Che's rise from young idealist to revolutionary hero during the Cuban Revolution. Part two depicts his efforts to bring change to all of Latin America and focuses on his campaign in Bolivia, where he died.

Shot in various locations ranging from the jungles of Bolivia to Mexico's Yucatan Peninsula, filming was grueling. "In this film, we went pretty fast," Del Toro says. "We went really fast."

Soderbergh wanted to film using only natural light, and production moved rapidly. On some days, Del Toro recounts, they only had 15 or 30 minutes to capture a scene.

One day of filming felt like a whole week of work, he says. "The way I felt on a Monday in this movie is the equivalent to how I felt at the end of the week of another movie."

Del Toro, who also co-produced the movie, isn't complaining though. He speaks with pride about the effort the cast and crew put in to the moviemaking process, which he describes as "hit and run."

"Che" is being released in two parts, but the epic is best viewed in its entirety, Del Toro says. "You'll get the full experience of what we went through, of the two movies together as one."

The full-length version of "Che" will have a limited opening in the U.S. on Dec. 12. It is scheduled to be released in separate parts in the UK on Jan. 2.