Meryl Streep had doubts about 'Doubt'

(CNN) -- It's hard to imagine Meryl Streep having second thoughts about tackling any role, but the actress admits that she had doubts about "Doubt," her newest project. 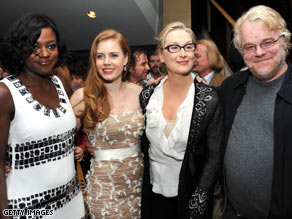 The film -- based on a Tony Award- and Pulitzer Prize-winning play by the same name -- examines what happens when a strict nun who heads a Catholic school in the Bronx suspects a charismatic priest of having an inappropriate relationship with a student.

"I actually didn't think it would ever be a movie," Streep said. "It was so thoroughly realized on stage, and it was so minimal. It was hard to imagine how or why you would make a movie out of it."

But Streep, who plays the terrifyingly severe and determined school principal, Sister Aloysius Beauvier, said she changed her mind when she saw the final product.

"How did they make the play without any children in it? It is just sort of amazing to me, because to me they are sort of the landscape. They are the lambs of the movie. They are the stakes. They are why everybody is passionate."

Her co-stars are passionate about sharing the screen with a Hollywood legend. Philip Seymour Hoffman, who plays the priest targeted by Streep's character in the film, says he "adores" her. Amy Adams calls Streep "a sweetheart." Viola Davis says she's "just fantastic."

Davis' performance in the movie is generating Oscar buzz, with Streep advising the actress to pick out a dress for the Academy Awards.

Davis, who plays the mother of the student at the center of the sexual abuse allegations at the school, said she drew on the experiences of her mom and other women she knows to bring the role to life. She expressed awe about any suggestion of an Oscar nomination.

"It's surreal. I don't know how to respond to that anymore," Davis said. "All I wanted to do was good work. ... Everything else is just the icing on the cake."

The movie is set in 1964, but the play was written by John Patrick Shanley after the sexual abuse scandal that rocked the Roman Catholic Church several years ago. Hoffman -- who plays Father Flynn, the priest under fire -- said the lurid headlines about molested children weren't even on his mind when he took on the project.

"It is really about something else. If people see it, they will know what I mean about that," Hoffman said.

Some have suggested that the play served as a criticism of the Bush administration's dogged belief that there were weapons of mass destruction in Iraq. Shanley, who won an Academy Award for his screenplay of "Moonstruck," told Entertainment Weekly that the play did have a political point.

"I'm not interested in morality," he told the magazine. "One of my larger premises in doing this play, in what's not said, is that doubt itself is a passionate exercise. I think it's perceived in this culture as something weak or denatured, and that's a huge mistake."

Adams said she became "a little obsessed" with the adaptation of the play to the big screen. She plays Sister James, a nun who expresses her suspicions about Father Flynn's relationship with the student to Sister Aloysius.

The movie is a departure for Adams, who became famous for sunnier roles in films like "Enchanted" and "Talladega Nights." But she said she doesn't mind being known as an eternally cheerful actress, because that description reflects "75 percent" of her real persona.

"There's 25 percent that's probably dark and grumpy and not personable at all, but I keep her at home," Adams said.

As for Oscar buzz surrounding her performance, the actress said she's keeping her fingers crossed for Streep and Davis to be nominated for their roles in "Doubt" but has no expectations for herself.

"It's always fun ,and I would love to. If it doesn't happen for me, it's all right as well," Adams said. "So, the experience of making the film was my get in this case."