LONDON, England (CNN) -- Famed for her opulent theatrical style in films like "Strictly Ballroom" and "Moulin Rouge!," production designer Catherine Martin is probably the last person you might expect to find in the remote Outback of Australia knocking up a film set. 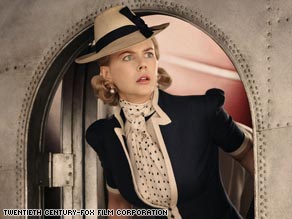 But this is exactly where the two-time Oscar-winner ended up in her role as co-producer of her husband Baz Luhrmann's latest film,"Australia," which stars Nicole Kidman and Hugh Jackman.

"I am certainly not a girlie girl," says Martin who worked in the role of production and costume designer on the film, which is the first identifiably Australian epic ever made. But she admits that she was grateful for help with the "mammoth" task of the film's logistics which she describes as an "eye-opener."

"Australia" was filmed in various locations across the huge country -- Vaclause New South Wales, Bowen, Queensland where Martin and her team constructed a huge exterior set to look like 1930s-era Darwin, and finally the remote East Kimberley region of Western Australia.

This is where they set about building "Faraway Downs," the sprawling cattle ranch in the middle of an inhospitable wilderness. In the film it belongs to Lady Sarah's husband and saving it from a takeover plot becomes the focus of the feisty aristocrat's epic journey across Australia with rough hewn cattleman, Drover (Jackman).

"We brought everything up there," says Martin of the film's main set which was situated in Carlton Hill, an isolated location in an area famed for its natural beauty.

It was so remote that the team had to build roads, and when Martin explains 36 huge trucks were needed to transport all the equipment and raw materials required to build "Faraway Downs" from scratch on the site, the scale of the production becomes clear.

"Logistically, 'Australia' was a mammoth task," says Martin, "Moving those number of people, and we had to build roads to get equipment in and ship things weeks in advance so they'd actually get there."

In the flesh she is a petite and blonde with a wide-eyed enthusiasm that causes her to stress-every-syllable when she talks. She's hugely garrulous, hugely engaging and is, in fact, wearing a very girlie jacket.

But it's also clear she's made of pretty steely stuff, which she needed to contend with some of the problems that beset the production. There were, as she puts it, some "pretty crazy times."

Like when it started raining in East Kimberley during the "dry," an apparently rare occurrence that, even more unusually, carried on for a number of days. Martin was in Sydney anxiously awaiting news from her team.

"I got sent a photo of "Faraway Downs" and it was just an open field, the house was under water.

"I just said to myself 'don't panic.' Anyway, three days in a row I got [the same] photos and I thought, 'I'm going to have to come clean, we're never going to be able to shoot in two weeks because everything will have gone moldy, the turf will be dead, the trees will be dead.'"

Martin decided to move the production back to Sydney where they would concentrate on stunt work with the horses, only to find out that an outbreak of equine flu had struck the Sydney area.

"I remember being in a car and hearing it on the radio at the very, very moment we'd decided to got back to Sydney.

"It meant we couldn't move the horses from the Northern Territory. And then we had the entire horse team running around trying to find doubles for our horses in Sydney."

Despite the pressures, Martin was still able to find the time to do what she does best -- create costumes with trademark wit and whimsy. She concentrated particularly on Kidman's costumes which Luhrmann felt were so central to the film's narrative that he wrote them into the script.

In one of Lady Sarah's most sartorially absurd moments, she wears a safari-style outfit complete with pith helmet, gauze netting and wire spectacles for the three-day journey from Darwin to "Faraway Downs" with Drover (Hugh Jackman).

To come up with the costume, Martin went to town, researching every possible picture she could find of women in safari suits in the 1930s -- from Jane in a Tarzan movie to a woman in Africa in 1932.

"It really gave me the key to the character, that Baz had her in her mind thinking this was completely appropriate.

"She was still on African safari in her head, that she was totally a fish out of water, that she had no concept of where she was coming to or the nature of the place, not one iota, she was costuming herself for the the experience and I loved that idea and that really helped me in thinking about the other costumes."

Martin is sometimes considered to be the creative brains behind her 16-year partnership with Luhrmann which began with camp classic "Strictly Ballroom" in 1992, but this is something she vigorously denies: "The reality is Baz sought me out when he first started working professionally and he has always been focused on the visual aspect."

But, she says, "I do think it is serendipitous that somehow we really do spark off each other."