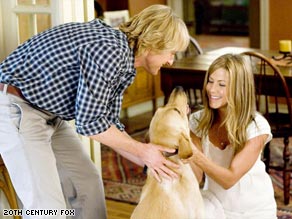 In "Marley & Me," Owen Wilson and Jennifer Aniston's characters welcome a dog into their lives.

He's friendly and lovable, but he devours everything in sight -- drywall, socks, big chunks of furniture (no, he doesn't just chew on them, he eats them).

As a dog owner, I can testify that "Marley & Me," based on the real John Grogan's smash 2005 memoir, is the single most endearing and authentic movie about the human-canine connection in decades. As directed by David Frankel ("The Devil Wears Prada"), though, it's also something more: a disarmingly enjoyable, wholehearted comic vision of the happy messiness of family life.

John and Jenny share an existence that, from the standpoint of our current economic times, already looks like paradise. He's a reporter who gets refashioned, by his testy editor (Alan Arkin), into a lifestyle columnist (only to keep complaining about it -- poor guy!). She's a feature writer who becomes a stay-at-home mom.

As the kids come along (three of them), the Grogans move into bigger and bigger houses, yet they have thwarted ambitions, fights that go on for days, and a general attitude of wistful loss toward all the freedoms they have given up to become parents.

"Marley & Me" celebrates two ordinary people as they try to fit love, work, children, and one volcanically misbehaved pooch into a single space. Marley may be the dog from hell, but we're meant to see that the Grogans, in their hearts, wouldn't have it any other way. Marley stands in for all the unruliness that can never be domesticated out of life.

You can domesticate Owen Wilson, but the shock is how good the role of beleaguered breadwinner looks on him. He and Aniston forge a nimble connection (they even get mad in style), and Wilson has a scene near the end with Marley that's the most wrenchingly tender acting of his career.

Using his scratchy, lackadaisical warmth to voice a testament to family, and to where dogs fit into it, he makes you feel like it's a wonderful life indeed.