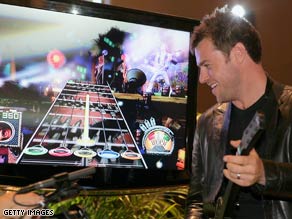 Actor Rodger Corser plays "Guitar Hero" at an April event in Australia. The game has revived interest in rock music.

Ulrich may have played songs from those old rock bands around the house on his stereo, but he gives credit for his son's excitement to another source: video games.

Myles Ulrich is a fan of games such as "Guitar Hero" and "Rock Band," which have spawned a comeback for rock music.

"It's a cool generational thing to share that with your kids," said Ulrich, the drummer for the multi-platinum quartet. "My [son's] favorite bands are ... the same bands that are my favorite bands -- the bands I grew up on."

A few years ago, rock music was struggling on the charts. With hip-hop and teen pop ruling, rock was finding it hard to break through with new music -- or sell more of the old.

But "Guitar Hero" and "Rock Band" have prompted kids born in the '90s to discover artists from the '70s and '80s such as Aerosmith, Twisted Sister and Pat Benatar. The games' amazing popularity -- last year, the two brought in more than $935 million in revenue, according to the NPD Group market research company -- has helped create success in other markets, according to observers.

Watch Ulrich and others praise the games on "American Morning" »

Geoff Mayfield, senior analyst and director of charts for Billboard magazine, said he sees a direct cause-and-effect for some of the artists who have licensed their songs to "Guitar Hero."

"A few weeks ago, when the game featuring Aerosmith ['Guitar Hero: Aerosmith'] came out, there was more than a 40 percent increase in their catalog sales. I expect you'll see that again when Metallica gets the same kind of treatment in a few weeks," Mayfield said. iReport.com: Do you shred on "Guitar Hero?"

Once wary of downloading, Metallica has changed its tune with its upcoming album.

"When 'Death Magnetic' comes out in September, you can actually download the new album the same day it comes out, and play it on your 'Guitar Hero III,' " Ulrich said -- fully aware of the irony, given his band's past litigation with the Internet music file-sharing service Napster.

Even in an uncertain economy, the video games also have increased interest in guitars, according to the nationwide Guitar Center chain. And bars holding "Guitar Hero" nights also have enjoyed a boost in business: Big Wangs sports tavern in Hollywood, California, reports a 25 percent to 35 percent increase in sales.

The results have played out at such places as Roosevelt High School in Los Angeles, where most teens have grown up on a steady diet of hip-hop and R&B.

Recently, heavy metal blared from the school's darkened auditorium as it sponsored a three-day "Guitar Hero Face-Off." Spotlights illuminated the competitors, and an audience full of enthusiasts screamed wildly at the end of each song.

It was enough to make 16-year-old finalist George Gomez nervous. "You got fans cheering you on," he marveled shyly.

For Mayfield, the marriage of music and video games makes perfect sense, especially for an ailing record industry that's been having trouble selling CDs.

"This is a chance for something that's been a competition to actually be an ally, if you will," he said.

Mayfield has never played "Guitar Hero" or "Rock Band," but he said he understands the irresistible appeal of kids and adults indulging in some harmless headbanging -- albeit with toy instruments.

"If you've ever played air guitar, more than likely, you weren't doing it to a Michael Jackson song. You were doing it to an Aerosmith song," he said.