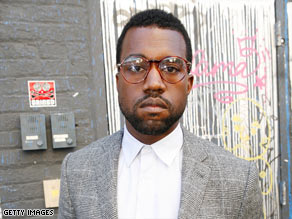 The incident near the airport's Terminal 4 involved the rap star; his road manager and bodyguard, Don Crowley; and a photographer and a cameraman who were taking their photos, airport police said.

The cameras of the paparazzi were damaged in the altercation, police said.

West, 31, and Crowley were both arrested on charges of felony vandalism.

Initial police reports that said Crowley also had been charged with battery were incorrect, police said.

West, a 10-time Grammy winner, and Crowley were in the airport to catch a flight to Honolulu, Hawaii, police said.

The pair were outside passenger security screening when the incident took place. Both men were taken to a Los Angeles police station for booking, airport police said.

Neither of the paparazzi were identified.

CNN could not immediately reach West's publicist for comment.

Celebrity Web site TMZ reported that the rap star is said to have grabbed a photographer's camera as the photographer was snapping pictures of West. The site posted a video of the incident shot by one of its reporters, who was also in the terminal.

The video was short and chaotic, and the man whom TMZ identifies as West never shows his face, which is shrouded in the hood of a gray sweatshirt.

Watch video of the scuffle »

According to the Web site, after West grabbed the camera from the photographer, Crowley took it from him, leaving the rap star with the lighting component.

The video shows the man in the gray sweatshirt and another man in a red sweatshirt, whom TMZ identifies as Crowley, each smashing parts of a camera on the floor.

The man in red then approaches another camera as it is filming. He reaches out for the camera, and it appears that a struggle ensues. As airport officials arrive, the man walks off.

TMZ reported that after the incident with the first photographer, Crowley grabbed the TMZ reporter's camera and broke it.

Police stopped West and Crowley as they tried to leave to go through security to board a plane, the Web site said.

West quickly became a hip-hop star after his first album, "College Dropout," debuted in 2004, earning him a Best Rap Album Grammy that year. He twice matched that feat with 2005's "Late Registration" and 2007's "Graduation."

The rapper is also known for controversial outbursts, most notably in 2005, when he went off script during an NBC telethon for victims of Hurricane Katrina, saying, "George Bush doesn't care about black people."

All About Kanye West