ASHEVILLE, North Carolina (CNN) -- In 1988, a relatively unknown rock and blues guitarist named Warren Haynes got some of his friends together to play music in Asheville, North Carolina. It was just an opportunity for local musicians to jam during the holidays, the one time of year they were all in town together. 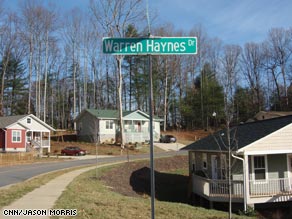 Warren Haynes' good work has been noted by the street named after him.

The artists also wanted to give back to the community, so they gave the money raised by their show to various charities.

The tradition has continued. Now celebrating its 20th anniversary, Haynes' Christmas Jam has evolved into an epic annual event for the musicians, fans, and particularly Habitat for Humanity.

"We need Habitat For Humanity more now than ever, with the whole mortgage crisis that put us where we are now, and the fact that Habitat is about building homes for people that can't afford homes as opposed to lending money to people who can't afford homes," Haynes told CNN.

Haynes and his wife, Stefani Scamardo, decided to donate 100 percent of the Christmas Jam proceeds to Habitat for Humanity years ago because they could see exactly where the money was going. They go back each year and meet the families they helped build homes for.

Singer Joan Osborne echoed Haynes' thoughts. "It's a scary time. A lot of people are losing their homes so it's good to be able to do something that helps with that specific problem," she said.

Going into 2008's shows, which were held December 12 and 13, the Christmas Jam had raised more than $665,000 for Asheville's Habitat For Humanity. The money has gone into building 12 houses in Enka Hills, a wooded community surrounded by mountains on a street the organization appropriately named Warren Haynes Drive. (In 2005 Habitat also built a house in the New Orleans Musicians Village.)

The Thursday before the show, Haynes presented the key to a new home to single mother Suzie Cromer and her 8-year-old daughter.

"Meeting the families and seeing the work that Habitat's doing with our help -- you know its hard to see that and not get emotional," Haynes said.

"Warren is a hero in our mind," said Habitat's Arianne Kjellquist. "In western North Carolina, the housing costs are really out of whack with what the local wages are, so there's a big discrepancy there. There are more people that maybe would have been approved previously when the lending standards weren't so strict."

Perhaps the most anticipated addition this year among both fans and artists was former Led Zeppelin member John Paul Jones, who played acoustic mandolin, bass and keyboards throughout the weekend with just about everyone. Jones said he was happy to pitch in.

"In the economic climate like this, people really just want to get out and enjoy themselves and forget about the day to day stuff that they have to deal with. So it works on many levels," Jones said. "The fact that it is for a good cause is just a huge bonus."

Haynes says the 20-year evolution of the Christmas Jam reflects his career. "We've grown up together. Its a parallel of the progress that I have achieved, and the event reflects not only the philosophy I share with these people but the mission."

And as fans danced the night away while the artists played their hearts out, families' dreams of owning their perfect home come true.

"I would have never imagined or dreamed that it would turn into what its turned into," Haynes reflected with a huge smile.