NEW YORK (CNN) -- Enya is an anomaly. Think about it: How many recording artists have enjoyed 20 years of success while never having toured? 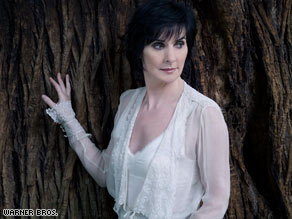 Enya sets her own pace when making albums. "And Winter Came" is her first CD in three years.

"The fans are very, very loyal," says the Irish chanteuse. "They're always saying, 'When is the next album?' They know when I finish in the studio it's got to be a few years before the next album."

Perhaps it's the vast gaps between releases that help make Enya, 47, the Emerald Isle's second-biggest-selling artist of all time (after U2). Thanks to a stipulation in her recording contract, the Grammy winner has the luxury of setting her own pace with each project, another rarity in the music business. She'll devote two to three years to each album, flitting between her Dublin castle and the studio, where she works tirelessly to perfect every celestial chord and layer harmony upon harmony.

"I always felt that the music sells by itself," she says. "The music has always been the successful aspect on my career and that means that, to me, I can always still stay very focused on music."

Her latest album -- the seventh of her career -- celebrates both the drama and quiet contemplation that come with the winter season. Called "And Winter Came," the release has reached the top 10 on album charts across Europe and in the U.S. since its November release.

And while Enya won't commit to the idea of taking her tunes on the road, she does hint at the possibility.

"To actually tour with the songs would be wonderful. It would be very much on a large scale: the orchestra, the choir. There'd be a lot of rehearsals, but it'd be very exciting," she says.

Enya spoke to CNN about how her music is like an onion (think layers, not tears), keeping a low profile, and marking the 20-year anniversary of "Watermark," her breakout album.

CNN: What does wintertime mean to you?

Enya: Wintertime for me is a time when I do a lot of my writing in the studio. It's a time I enjoy. And it's very reflective and a very calming time of the year. Throughout the year I gather a lot of musical inspirations and this is where I bring them to the studio and see what will evolve musically.

CNN: You set out to make a Christmas album. How did the project evolve?

Enya: I've always wanted to put together a Christmas album. So I was writing some Christmas carols and what happened was some of the songs started to veer more into winter themes. And when I discussed it with [producer and lyricist] Nicky and Roma [Ryan], they felt, well, within winter is the celebration of Christmas, so let's infuse the two themes together.

CNN: A lot of people think of Enya as a soloist, but really you're kind of a trio, aren't you?

Enya: I work with two other people, the producer Nicky Ryan and Roma Ryan, the lyricist.

The way I work with Nicky and Roma is firstly I do the writing of the melodies in the songs, and that's kind of the solitude moment for me in the studio, which I enjoy very much. When I have the melody -- the idea of the melody -- I play that to Nicky and Roma. ... I get to see their reaction immediately. Is this a song for the album? And I can see from their reaction -- "Yes, this is going to work," or perhaps it's not.

There are a lot of ideas that Nicky had wanted to experiment with. When I met with him first he had this idea of using a voice -- one voice -- as an instrument to layer many times and he knew my love of harmonies. Some people who hear the songs think that we have a set routine, a set formula we work with. It isn't, ... because each song is very different, and it's very spontaneous on my part.

CNN: About the layering of your voice ... at any given time how many Enyas might we be listening to?

Enya: I don't count! It's a very spontaneous moment on my behalf. I will listen back to the last harmony I've sung, and then I'll sort of try to enhance that harmony. Then Nicky will decide if he'll record my voice 20 times or 30 times [for] that one part.

CNN: I read that you might [record] as many as 80 vocal tracks. Is that a reasonable number? And then I read 500. That's got to be ridiculous!

Enya: Yes, it can be, but you have to remember that [if] it's 500 vocals I wouldn't have sung them at the same time. We're talking about over two years that we keep going back to arrange vocal parts on these songs. It's a very slow process.

CNN: It's hard to believe that it was about 20 years ago that you made "Watermark." Do you ever go back and listen to that record?

Enya: Well, with the anniversary, yes, I've been listening to "Watermark." It's kind of like a journal for me. It takes you back to that time in your life. Each song has its own little story and I can hear the life of that song. You know how it was written, what inspired me, what worked, what didn't work. But the nice thing about spending two to three years on an album is I can say there's nothing I would change on any of the albums.

CNN: You've said that you change the formula a little with each album, but to an untrained ear your music has sort of stayed the same throughout your career. Are you a believer in the saying "If it ain't broke, don't fix it"?

Enya: Musically it has to be something that I'm comfortable to perform. Would we ever hear Enya with a guitar solo? I say, "Never say never." And there's a guitar solo on "My! My! Time Flies." This happened because it suited the song. It's always got to sound like me because it's my voice and there's always this little sense of melancholy that is inherent in my melodies. I think that's because of my Irish culture.

CNN: Your manager has suggested that one of the secrets to your success is that you keep a fairly low profile. Do you agree?

Enya: It's very easy for me to keep a low profile because the focus I feel is always on the music. Success and fame are two different things. And so I feel the success is always towards the music, which means that I can have a very normal and private lifestyle.