Billy Connolly: From welder to wit

LONDON, England (CNN) -- For a man once accustomed to wearing banana boots, tights and a leotard -- together -- today's choice of attire is remarkably sedate. 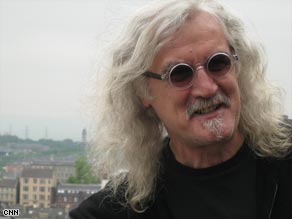 Scottish actor and comedian Billy Connolly is wearing black jeans, a black T-shirt and a brown jacket to give CNN's "Revealed" a tour of his beloved hometown of Glasgow.

He'd almost blend into the background if it wasn't for his wild mop of grey hair, distinctive round glasses and compulsion to chat with every passer by.

"You know he just loves an audience," says his long-suffering but immensely proud and supportive wife, Pamela Stephenson, an Australian comedienne-turned-psychotherapist.

"I mean it's frustrating for me because we'll be in a restaurant or we'll be on the street or something and I'm trying to get somewhere, and someone will stop him and he'll say 'Ah yes!' and he'll start telling a story, and all of a sudden they're best friends."

Billy Connolly has a lot of best friends in Glasgow. Men cross the street to shake his hand and elderly ladies stop to enquire about his health. On spying the camera, one dressed in a neat blue suit and sensible flats asks, "you doing a wee program, son?"

"You want to be famous?" replies Connolly, engulfing her tiny frame in a six-foot bear hug from which she emits a muffled whoop. "Your first screen kiss," he adds, planting a smacker square on her lips. She giggles as they part. "Thanks Billy," she says, giving him the thumbs-up.

The streets of Glasgow weren't nearly as friendly 65 years ago when the young Billy Connolly arrived with a plop on the cold linoleum floor of his parents' tenement house. He was the second of two children born to a young family that was soon to fracture.

Not long after Billy's birth, his father, William Connolly, left to join the war effort in Burma. His mother, Mamie Connolly, soon tired of looking after two children on her own and walked out on both of them when Billy was barely four years old.

Watch Connolly discuss how his childhood drove him into comedy »

The children were taken in by two aunts who abused them even after their father's return from the war in March 1946. Far from protecting them, he too mentally and physically abused his young son.

"The most overwhelming thing that happens to you isn't the abuse itself, the physical side," Connolly tells CNN. "It's the loss of love, there's a loss of respect happens and it's irredeemable, it can't be gotten back."

As a boy, Connolly had difficulty retaining information. He did poorly at school and left to work as an apprentice welder at the local shipyards.

By then, he'd also discovered the banjo. "When I saw Pete Seeger playing the banjo it completely changed my life," Connolly tells CNN.

He discovered his comedic talents while playing a folk music gig in Paisley with his friend Jimmy Steel. Halfway through a song, Connolly forgot the lyrics so he told the audience the storyline instead. To his great surprise, they laughed and a comedian was born.

"Though I must say, I really wanted to be a banjo hero, a folkie with a beard and an instrument and music, and people go 'did you hear him play?' It's purely mine now -- it isn't for the public anymore, it's just for me and my other pals who play."

Watch a rare performance of Billy on Banjo ».

In the early 1970s, Billy Connolly's anecdote-heavy, expletive-strewn stand-up shows were selling out venues in Scotland. In 1975, he hit the big time after shocking audiences with a bawdy joke on popular English talk show "Parkinson."

"I told a joke about a guy parking a bicycle in a woman's bum, and it got the most phenomenal reception. Parkinson just collapsed," Connolly recalls.

"He literally told one joke on that show and that made him as a comedian," presenter Michael Parkinson tells CNN.

"Whenever he came on the show after that, he used to put two to three million on the viewing figures. The only two people who ever did that were Mohammad Ali and Billy Connolly."

While Billy Connolly's career was on an upward trajectory, though, his personal life was spiraling out of control in a toxic blur of drink and drugs.

"I was quite suicidal at the time," he tells CNN. "The fame was getting on my nerves. I was really fed up of being famous. I found it tiresome; the drinking was a way out of it, but then it became its own problem."

His first marriage was crumbling when he met wife Pamela Stephenson. "It was like a door opening and daylight streaming in," he says.

"Billy will sometimes say things like I saved him. It's just not true, he saved himself," Stephenson tells CNN. Pamela Stephenson talks about life with Billy

"He's very, very smart," she continues. "He saw that there was a chance for personal happiness and a chance to survive and to take care of his enormous talent and move into a far greater happiness and he made a choice to do that."

More than thirty years after his sell-out Scottish shows, he's still packing them in.

His recent tour of Northern Ireland sold out in record time -- 20,000 seats in six minutes. "It's just a case of putting the name up and they come," promoter Pat Egan tells CNN.

"After forty years it shouldn't do that. It should level off to a plateau, or start dipping.

"The only thing I can put it down to is he doesn't do a lot of press, he doesn't do radio. I wish I could take credit for it and say it was a clever management decision that made it happen but it's not, it's just that what he does he does brilliantly and people love it and they just want to come and see more of it."

The banana boots Connolly used to wear on stage to "sex up" his image now sit in a glass cabinet at the local museum, "The People's Palace," in Glasgow.

He no longer wears outlandish costumes on stage. He doesn't need to.

If the reception he receives on the streets of his hometown is anything to go by, he'll have them rolling in the aisles for some time to come.