A laugh a minute? Life with Billy Connolly

LONDON, England (CNN) -- They first met in the autumn of 1979; she playing the role of the lovelorn terrorist, he dressed as a rather sloppy Ayatollah Khomeini. 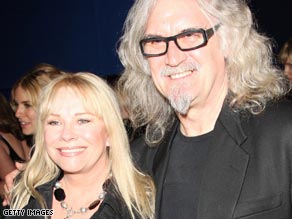 Pamela Stephenson first met Billy Connolly on the set of a comedy show in 1979. They married in Fiji in 1990.

It may not have been love at first sight on the set of British comedy show "Not the Nine O'Clock News," but love, marriage and children eventually followed.

She tells CNN's Revealed about her first impressions of her husband, his unique ability to keep audiences entertained and what she learnt about his addictions and childhood abuse while writing his best-selling biography, "Billy."

CNN: Take us back to the beginning. How did you meet Billy Connolly?

Pamela Stephenson: I'm not quite sure what Billy's version of how we met is like because he was very drunk. I met him when I was a performer on "Not The Nine O'Clock News" and he was a guest. He was just shaggy and some kind of terrible beastie. But I was attracted to him immediately, maybe because he was so unusual. I think what I picked up on was his dichotomy -- that beastiness and the underlying sensitivity that he has. I think that's something that audiences relate to, you're aware of all the toughness, but underneath you just know that there's philosophy and this poetic, Celtic nature that speaks to people. Also his pain, his underlying sadness and the pain of his childhood ... when I first met him I think I connected with that.

He played the Ayatollah Khomeini in a scene on "Not The Nine O'Clock News" and I played a demented fan singing a love song to him, it was in days when you could do stuff like that, I suppose.

And then we did an interview, I pretending to be British TV personality Janet Street-Porter, with giant fake teeth which kept falling out. Of course, he could never keep a straight face; I thought he was dreadfully unprofessional because he just kept laughing, especially when my teeth fell out -- my fake teeth -- fell out.

PS: People always think that being married to Billy means that I get non-stop Billy Connolly concerts. It's not nearly as exciting as that, although he's adorable. But it's boring sometimes and he would say the same. There are moments when I wish he would go and make me a cup of tea, which he does very often. Actually, Billy is quite a quiet person. He's a little reclusive and I don't think it's necessarily his personality. With the highs he experiences on stage he needs to be very quiet when he's not.

Billy Connolly takes CNN's Revealed on a tour of his home »

CNN: What made you write a biography of his life? Was it the first time he opened up about his childhood?

PS: When I wrote "Billy," it was the first time that Billy really looked at his childhood in a chronological order and with depth. It was a painful process, but cathartic. The book gave me the opportunity to understand a lot more about him. Just putting some of this together, the sexual abuse, for example, that he received from his father, the physical abuse he received from his aunts, helped me understand why there's a part of him that's very closed off.

His learning disability was never understood. Now we'd call it an attention disorder. In those days, he had difficulty concentrating, for which he was beaten and taunted at school. People told him he was stupid and to this day there's a part of him that thinks that's he's not as clever as other people and yet he is absolutely brilliant. He's incredibly well-read and very erudite.

CNN: Can you tell us about Billy's problems with alcohol and drugs and how you helped him?

PS: Billy was extremely famous in Scotland, and you know what happens, especially with people who don't think they are very worthy. As with Billy, they don't handle fame because they don't feel they deserve it and they'll turn to alcohol and drugs.

It became very serious and by the time I met him he was on a very self-destructive path. At first, that was appealing to me, but later I realized I can't be with somebody like that because I don't want to watch him destroy himself. I didn't tell him, "You've gotta clean up your act," I just said I can't deal with this. I discovered you can't make anyone stop drinking or stop taking drugs, you have to just protect yourself and if they want to jump on the good train, they will. Fortunately it worked.

CNN: How would you describe Billy's style of comedy?

PS: Billy doesn't have a style, because to have a style it would mean that there have to be other people with a similar way of working. He goes on stage and it's like he's got these comedy angels whispering in his ear. He makes this extraordinary connection with the audience, and of course he's very astute and funny about politics. He sees the funny side of all kinds of things -- human nature, human behavior, world events, politicians. He'll talk about that with such passion. It's what many of us think but don't want to say. Billy will see something on television or notice something on the street or he'll just think something and it'll go into his computer of a brain and it'll stumble out when he's on stage.

See Billy Connolly perform on a recent tour of Ireland »

CNN: Is he the same person on and off stage?

PS: He's honest and real. He's a man of the people, a working class hero. It's a cliché, but people know that he has struggled; they know he's come from the tough part of Glasgow. Billy just loves an audience, he loves speaking to people if they're nice to him, and they usually are. When he's finished his show, he doesn't go home. He stays in his dressing room and people will come and see him and he'll talk to them for another hour.

CNN: He says he's getting more and more nervous when he goes on stage -- have you noticed a change?

PS: I don't think he's getting more nervous. At his age, maybe he thinks that it should have become easier -- well, it's not going to become easier. It's incredibly tough to go on stage in front of four or five thousand people and sustain [their interest] by yourself. And one thing that really impresses me, again as a psychologist, is that I think he is really healing. I think that people really have the opportunity to just laugh like that and it's so good for you. I feel fantastic when I go to one of his shows and come out and I'm just sick with laughter.

CNN: How does he feel when he comes off stage? He says it can be tough and envies the audience. They can go home and forget about it.

PS: Most performers struggle with the letdown after a show, and Billy's no exception. It's tough because it takes time for adrenalin to leave the system. That's actually one reason why a lot of comedians turn to alcohol, because it's a depressant and takes you down.

Now that Billy doesn't drink he's found another way -- he goes back to his hotel and stays quiet. Sometimes he likes to eat after the show but not very often. He will just want to veg out, watch TV. Playing his banjo is a great way for him to relax.

Watch a rare performance of Billy on banjo »

He doesn't like me being around when he's touring because he just likes to do his thing. I want to have some food or go and do something. He becomes a bit of a hermit, and that's appropriate for someone who expends that amount of energy and brainpower on stage.

CNN: Billy says he finds the routine of touring increasingly tough -- do you think he will stop soon?

PS: When Billy's touring, he'll say, "Oh I don't want to tour anymore, I've had enough it's too hard on the road." But the truth is, when he's not touring, he wants to go back. It's probably his happiest time. I have been a comedian so I know a little bit about what it's like to be on stage and know that when things are working fantastically, and you're getting that appreciation from the audience. It is an incredible high.

It's pretty hard for me as a wife or us as a family or any of his fans or friends to match up to that kind of adulation and so, you know, he deserves it and I have to remind him that it is a lot of fun for him.

CNN: How would you describe his dress sense?

PS: Billy is a fashion maven. He spends most of his time in New York now so, you know, the New York "Black is the new black" is ... that's got to him a bit. He's influenced by Rock 'n' Roll and Vivienne Westwood and edgy stuff. But he just puts it together in his own unique way. He also takes great pride in his body.

His closet is still extremely fun. It's far more colorful than mine. I have grey and black suits and things for work -- he loves colorful shirts.

It will be a shame if he tones himself down, but I don't think that will happen. He borrows my clothes sometimes, if he sees something particularly mad. We used to say, "First up, best dressed," which is the Glasgow expression for a particularly fun brooch or hat.

All About Entertainment • Stand-up Comedy