The cartoonist beloved by GIs and regular guys

(CNN) -- George S. Patton did not like Willie and Joe. 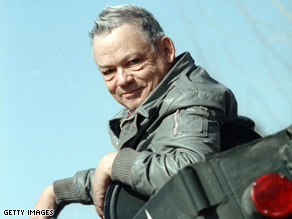 Bill Mauldin, on top of a jeep (his favored mode of transportation), was a hero to soldiers for his cartoons.

The famed general was a spit-and-polish man, and "Willie & Joe" -- Bill Mauldin's popular cartoon dogfaces, who appeared every day in the military newspaper Stars and Stripes -- were anything but: unshaven, rumpled, their boots caked with mud, eyes weary from days on the line.

The general made it known that he was not amused, and eventually Mauldin -- a 23-year-old sergeant who'd entered the Army to escape an aimless life in the rugged Southwest -- was summoned to Patton's impressive headquarters, a requisitioned palace in Luxembourg.

"Now then, Sergeant," Patton said to Mauldin, as recalled in a new biography, Todd DePastino's "Bill Mauldin: A Life Up Front" (W.W. Norton). "About those pictures you draw of those god-awful things you call soldiers. ... No respect for the Army, their officers, or themselves. ... What are you trying to do, incite a goddamn mutiny?"

See some of Mauldin's award-winning work »

That was the last thing on Mauldin's mind. He was trying to tell the truth.

The cartoonist, who died at age 81 in 2003, had a storied career that included two Pulitzers -- including one for "Willie & Joe" -- several best-selling books and renown from veterans. But he never let his abiding concern for the regular guy stray far from his thoughts.

Like many of the postwar generation, all he knew of Mauldin were the occasional references in Charles Schulz's "Peanuts," in which Snoopy would talk about quaffing root beers at Mauldin's house.

"I got 'Up Front' [Mauldin's first book], read it, and was stunned by the genius of the artwork," he recalls in an interview. "It was like a hidden transcription of the war. ... I wanted to know what was behind the cartoons, and why they were allowed to be published."

Indeed, "Willie & Joe" was unlike anything that had appeared in America during World War II. In the early years of the war, the U.S. government had focused on the upbeat, but as the optimism of U.S. entry gave way to the two-steps-forward, one-step-back grind of daily battle -- coupled with stark sacrifices at home -- the strategy fell apart.

Mauldin's characters were bluntly honest: War was dirty, absurd, bitter hard work. "Willie & Joe" quickly caught on with both enlisted men and -- upon syndication in the States -- the general public.

"I think the home front was hungry for the truth," says DePastino.

Mauldin's cartoons provided "a needed dose of realism," he says. "[The message was] the enemy is lethal and people overseas are sacrificing more than you are."

But Mauldin had some officers on his side, up to and including the Supreme Allied Commander himself, Dwight D. Eisenhower.

When Mauldin returned to the States, he was a hero. His first book, "Up Front" -- a memoir with cartoons -- became a tremendous best-seller, as did the follow-up, "Back Home."

For a time he lived in suburban Rockland County, New York, among other successful artists and writers. But life among the creative swells gnawed at him, and in the late '50s he became an editorial cartoonist, first for the St. Louis Post-Dispatch, later for the Chicago Sun-Times. He took on racism, Cold War politics, Vietnam and Chicago Mayor Richard Daley.

He also went through the classic changes of his generation. He struggled with alcoholism. He was twice divorced, grappled with the counterculture, watched the World War II generation become forgotten and then deified.

Through it all, he maintained a healthy skepticism for the establishment, whether it be martinet officers, self-important politicians or the suits in the corner office.

DePastino remains surprised that his is the first biography of Mauldin, which perhaps speaks to the low regard our culture -- even pop culture -- has for cartoonists. "If Mauldin had been a writer, there would have been a biography [by now]," he says.

But the soldiers themselves -- men such as Schulz, a World War II vet who didn't meet Mauldin until years after first mentioning him in "Peanuts" -- knew Mauldin's value. When he talks about the book, DePastino says, he gets his most emotional responses from veterans and their families.

"His art was about a group of men who are suffering unspeakable horrors in the trenches. His audience was those very men," he says. "It's odd -- he was kind of mirroring their lives back to them. ... He was doing this for those guys. How many artists do that?"

All About Cartoons and Animation