NEW YORK (CNN) -- A federal judge on Monday ruled against a Web site operator who was seeking to publish an encyclopedia about the Harry Potter series of novels, blocking publication of "The Harry Potter Lexicon" after concluding that it would cause author J.K. Rowling "irreparable injury." 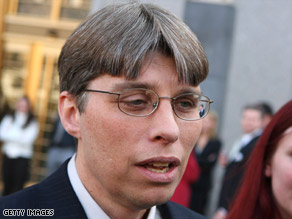 Steven Vander Ark speaks to the media outside the U.S. District Court on April 15, 2008 in New York City.

Vander Ark and RDR Books claimed the book should not be blocked from publication because it was protected by the "fair use" doctrine, which allows for commentary and critique of literary works.

Patterson, in his ruling, said the defendants failed to demonstrate fair use.

Rowling issued a statement after Monday's ruling, saying, "I took no pleasure at all in bringing legal action and am delighted that this issue has been resolved favorably."

Vander Ark did not immediately return calls from CNN on Monday. "We are obviously disappointed with the result, and RDR is considering all of its options, including an appeal," attorney David S. Hammer said.

Rowling, who said she has long planned to publish her own encyclopedia, and Warner Brothers Entertainment, producer of the Potter films, filed suit to stop RDR from publishing the book. Warner Brothers is owned by Time Warner, CNN's parent company.