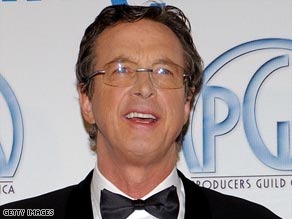 Michael Crichton, here in 2005, was a director and best-selling author. He co-created the TV series "ER."

Crichton died unexpectedly Tuesday "after a courageous and private battle against cancer," the release said.

Crichton, a medical doctor, was attracted to cautionary science tales.

Watch more about the life of Crichton »

"Jurassic Park" -- perhaps his best-known work -- concerned capturing the DNA of dinosaurs and bringing them to life on a modern island, where they soon run amok; "The Andromeda Strain," his first major fiction success, involves an alien microorganism that's studied in a special military compound after causing death in a nearby community.

Crichton also invited controversy with some of his scientific views. He was an avowed skeptic of global climate change, giving lectures warning against "consensus science." He later took on global warming and the theories surrounding it in his 2004 novel, "State of Fear," which attracted attacks in its own right from scientists, including NASA climatologist James Hansen. iReport.com: Were you a fan? Share your tributes.

Crichton was a distinctive figure in the entertainment business, a trained physician whose interests included writing, filmmaking and television. (He was physically distinctive as well, standing 6 feet 9 inches.)

He published "The Andromeda Strain" while he was still a medical student at Harvard Medical School. He wrote a story about a 19th-century train robbery, called "The Great Train Robbery," and then directed the 1979 film version.

In 1993, while working on the film version of "Jurassic Park" with Steven Spielberg, he teamed with the director to create "ER." The NBC series set in a Chicago emergency room debuted in 1994 and became a huge hit, making a star of George Clooney. Crichton originally wrote the script for the pilot in 1974.

"Michael's talent out-scaled even his own dinosaurs of 'Jurassic Park,' " said Spielberg, a friend of Crichton's for 40 years, according to The Associated Press. "He was the greatest at blending science with big theatrical concepts, which is what gave credibility to dinosaurs again walking the Earth. ... Michael was a gentle soul who reserved his flamboyant side for his novels. There is no one in the wings that will ever take his place."

Michael Crichton was born in Chicago in 1942 and grew up in New York's suburbs. His father was a journalist and Michael loved the writing profession. He went to medical school partly out of a concern he wouldn't be able to make writing a career, but the success of "The Andromeda Strain" in 1969 -- the book was chosen by the Book-of-the-Month Club and optioned by Hollywood -- made him change his mind, though he still had an M.D.

Though most of Crichton's books were major best-sellers involving science, he could ruffle feathers when he took on social issues. "Rising Sun" (1992) came out during a time when Americans feared Japanese ascendance, particularly when it came to technology. "Disclosure" (1994) was about a sexual harassment case. iReport.com: How did Crichton's work affect you? Share your tributes

Crichton won an Emmy, a Peabody, a Writers Guild of America Award for "ER," and won other awards as well.

"Through his books, Michael Crichton served as an inspiration to students of all ages, challenged scientists in many fields, and illuminated the mysteries of the world in a way we could all understand," the news release said.

Crichton was married five times and had one child.

A private funeral service is expected.