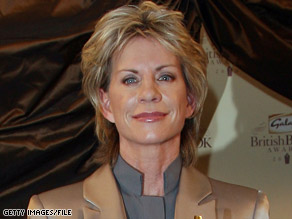 "I'm very interested in what motivates people, why they do what they do, how they do it," Patricia Cornwell said.

"I could treat readers in each book to some new aspect that they wouldn't be familiar with," Cornwell said.

Now the author is bombarded with "CSI"-like information from every side -- from "Bones" to "Forensic Files" to, well, "CSI."

"It's like you create this monster and find out it's living in the house with you, and it's banished you to a room because it has more power than you," she said.

Cornwell knew she had to adapt to the changing entertainment climate. "One of the questions I really did ask myself was, 'What's the one thing I have no one else does?' "

The answer was chief medical examiner Kay Scarpetta, Cornwell's heroine. Scarpetta is independent, feisty and someone Cornwell knows better than she knows herself. To honor that close relationship, Cornwell decided to name her 16th book in the series after its main character, titling it simply "Scarpetta."

In the novel, Scarpetta leaves South Carolina for New York, where the NYPD has asked her to examine an injured psychiatric patient. The patient has a graphic tale to tell -- one of paranoia and murder.

The novelist said her books all have two things in common: First, of course, is a plot twist that allows Scarpetta to make a Sherlock Holmes-like deduction.

The second is intriguing character interaction.

"What's going on with them in this book? What are they doing with or to each other? Who's in love? Who isn't? Who's on the outs with whom? Because I hope, in the end, [my books] are like high-level, crime soap operas."

With two decades of character history, Cornwell has a lot to work with in that area. But her books are also full of intellectual fodder. Scarpetta is a disciplined academic -- a scientist with a law degree.

Cornwell spent six years working in a medical examiner's office before writing her first book, and she continues to spend time with professionals to keep up on new forensic technology.

"I was never a scientific person," Cornwell said. "When I got interested in science I had to learn it after the fact... and that was good because I had already learned how to describe things, how to ask questions the audience would want answered. I was much better able to translate things into a language someone else could grasp."

Her dedication to understanding her subject translates into other areas as well. Cornwell became a helicopter pilot, a certified scuba diver and qualified for a motorcycle license, all because she was writing about characters who were doing those things.

But Cornwell said "Scarpetta" is actually more uplifting than her last couple of books, which took on a more twisted aura. "I'm glad because I think we live in very dark times and no one wants to read a depressing book now."

Still, Cornwell has been delving deeper into her characters' minds with each new book, and "Scarpetta" won't alter that trend.

"I'm very interested in what motivates people, why they do what they do, how they do it," she said. "It probably has something to do with where I am in life. I'm 52 years old and I think differently than I did at 42."

Fans have asked if this is Cornwell's last book in the series -- noting that the title "Scarpetta" is very ominous-sounding. But she promises to keep writing as long as the characters let her.