(CNN) -- Named in 1999 as the male "athlete of the century" by the International Association of Athletics Federations, Carl Lewis embodied the Olympic motto -- "Citius, altius, fortius" (Faster, higher, stronger). 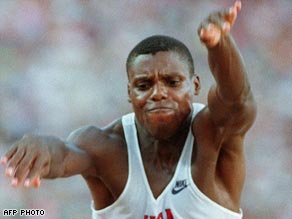 Lewis leaps to gold in Barcelona in 1992.

The American twice won gold in the 100 meters, the Olympic blue riband event, but he arguably achieved more in the long jump, a discipline in which he was unbeaten in all competition for a decade and won four straight Olympic gold medals between 1984 and 1996.

Lewis collected four gold medals at the 1984 Games in Los Angeles, emulating the achievement of Jessie Owens in Munich in 1936.

Born in Alabama in the 1960s to parents who were veterans of the civil rights movement, it was a comparison that made Lewis especially proud.

Lewis' 9.9-second victory in the 100 meters by eight feet was the biggest winning margin in Olympic history.

Unchallenged in the long jump, Lewis jumped 8.54 meters into the wind with his first effort, fouled on his second leap, and passed on his final four jumps.

The 1988 Games in Seoul, South Korea, were billed as a showdown between Lewis and Canadian sprinter Ben Johnson who had won the 100 meters at the 1987 world championships in a world record 9.83 seconds.

Johnson finished first in 9.79 seconds, but three days later he was sent home in disgrace after failing a doping test.

Lewis, second on the track, earned another gold medal and was also awarded the world record for his time of 9.93 seconds.

He also became the first athlete ever to successfully defend the 100 meters title, a feat he emulated in the long jump.

The previous year he had been beaten in the long jump at the world championships by Mike Powell, who had also broken the world record.

But Lewis hit back, beating his American rival by three centimeters with a leap of 8.67 meters for his third straight title.

The 1996 Games in Atlanta should have been no more than a farewell appearance in an Olympic career that had also begun on home soil. Lewis had barely qualified for the U.S. team, finishing third in the long jump trials.

Yet he somehow rose to the occasion, producing his best jump in four years to claim gold again, 12 years after he had first topped the podium, and retire undefeated in Olympic long jump competitions.

It was, wrote Rick Reilly in Sports Illustrated, "quite possibly his most impossible moment in an impossibly brilliant career."