(CNN) -- That Africans today so dominate distance running is in part testament to the career of Kipchoge (Kip) Keino. 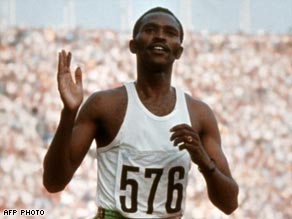 Keino claimed an unexpected victory in the 3,000m steeplechase in Munich in 1972.

The first black African to break onto the international stage at the beginning of the 1960s, Kip Keino won two Olympic golds and was a formidable force in the sport for 12 years.

Other athletes would win more golds, but few would win races and hold records at all distances from 1,500 meters to 10,000 meters.

Keino was 24-years-old before he competed at his first Olympic Games in Tokyo in 1964 where he finished 10th and fifth in the 1,500 meters and 5,000 meters respectively.

His form looked good for the high-altitude games of Mexico City in 1968, but stomach cramps forced him out of the 10,000m with just two laps to go.

He recovered to win a stunning gold in the 1,500m. Knowing that race favorite, Jim Ryun had a devastating kick in the final hundreds, Keino decided to hit the front early.

He managed to hold on and finished 20 meters ahead of Ryan -- the largest winning margin and the second fastest time in the event's history.

In the same year he also took a silver in the 5,000m. He had run six races in just eight days despite a gallbladder infection.

But it was at the Munich Games of 1972 that the untrained Nandi tribesman from Kipsano, in the high plains of Kenya, proved he was born to run.

In the steeplechase, with only one win from his previous four competitive attempts at the event and twenty-three others lining up with better personal times, Keino was not even expected to make the final.

Yet, somehow he staved off challenges from his more experienced compatriot, Ben Jipcho, and Finland's Tapio Kantanen, to win in an Olympic record time of eight minutes 23.6 seconds.

Keino will be remembered for two things: opening up the latent athletic talent of Africa and his disquieting natural ability to conquer all-comers in five distinct events.

When he finally retired after the All Africa Games in Lagos in 1975, he fittingly returned home to a daughter he and his wife had named Milka Olympia Chelagat.

All About Olympic Games • Sports • Running