(CNN) -- The greatest in an illustrious lineage of Cuban fighters, Savon dominated the amateur heavyweight division between winning his first world championship in 1986 and claiming his third Olympic gold medal in 2000. 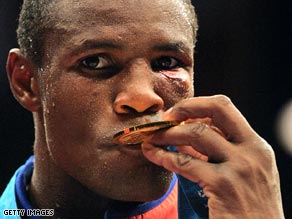 Savon's final fight, in Sydney aged 33, was also one of his toughest.

By the end he was bleeding badly from a cut underneath his eye, yet he still out-scored Russian opponent Sultan Ahmed Ibragimov 21-13.

Raising a national flag above his head -- he had been given it personally by Fidel Castro before leaving for Australia -- he dedicated his success to the people of Cuba.

By winning his third gold medal, Savon also emulated the achievement of compatriot Tefilo Stevenson, who dominated the super heavyweight division between 1972 and 1980.

The pair are the only two fighters to win the same division at three Olympics.

Savon was arguably a better fighter. He would probably have won gold in Seoul in 1988 as well, had Cuba not boycotted the Games.

And his run of six straight amateur world championships was only ended in 1999 when the entire Cuban team walked out in protest at alleged refereeing injustices.

In Barcelona in 1992, Savon had earned his first Olympic gold with a crushing 14-1 win against Nigeria's David Izonritel.

With amateur boxing's age limit of 34, Savon retired after Sydney to become coach of the Cuban national team.

What would Savon have achieved if he had abandoned the amateur ranks? The offers were certainly there: Don King reputedly offered him $10 million to fight professionally.

Many experts argue that Savon could have been as dominant as another former Olympic champion -- Cassius Clay.

Yet, fittingly for a great Olympian, Savon has remained defiantly amateur and an outspoken critic of professional boxing's casino culture.

"I never would have traded the love and affection of my people for all the millions in the world," he said.